175,000 Excess Deaths! Due to overdrawn lockdowns!

stock here: been meaning to do this quite some time. 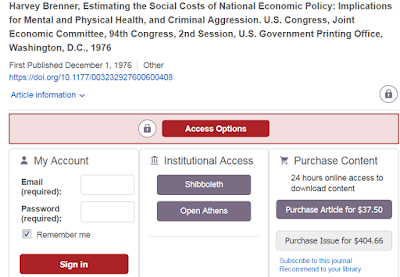 I issued an inflammatory statement to soem peers, AOC is willing to kill 370,000 people by extending lockdowns.

Simple calcs, at the time, unemployment was 10% over the February 2020, 13% versus 3%.   And "conventional wisdom" states that for every 1% increase in unemployment (over an unspecified period of time), results in 37,000 deaths.  But I never had the source data on those numbers, and often dangerous to fly forward without a data check.

Brenner Model is famous, but is already 50 years old.  In 1970 he estimated 37,000.   Hilarious that Brennan did this work for John Hopkins U, which is currently and infamously involved in the data distortion, complicit with the CDC, NIH, WHO, et al.

Lets call it a 3% long term effect on employment.   Systems blown up and destroyed due not just come back due to pent up demand!
My estimate: If they do not do more lockdown maneuvers

So this article calculates that if we have a sustained increase in unemployment, the following are "deaths of despair".   This was written in March, so once again, we have better data, as the recovery has been pretty quick.      Keep in mind, there are much more costs in morbidity, alcoholism, relapse into opiods, stress, child abuse.    Death is one severe metric that the libs like to trot out as "even one death is horrible".

Freaking get over it.   Life is the leading cause of death by far!

My lib friends just abhore it when I say "this is a numbers game".    They can't get it, because they can''t think past the "even one death is horrible" meme.    Acting smart can mitigate damages, acting stupid by trying to save "every life" will result in much more death and problems.