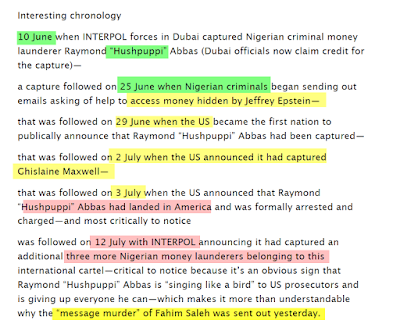 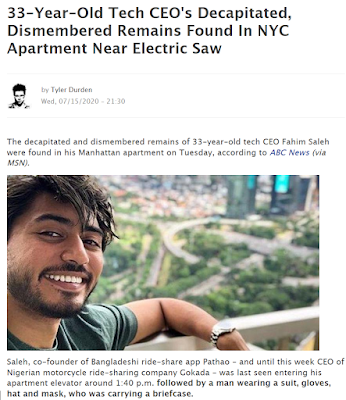 ZH is still useful, although a mouthpiece of the Cabal, just watch how they hype the SARS-2 scare everyday, with a picture of the beach....keep people away from the thing they love the most, and where there is zero chance of catching SARS-2.

Seen at ZH, and the reason I write about it, is that so much of "this" situation we are in is based on money laundering, after being stolen or created through drugs or weapons, or transferred from things like foreign aid, that NEEDS to get back to the source politicians and organizations.

So a comment in the ZH article pointed to a honcho Nigerian money launderer..... 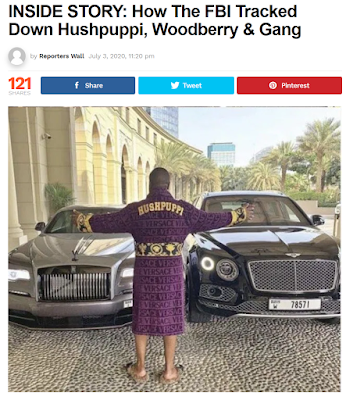 It should be noted that Saleh (dead guy) was enamoured with young Nigerians....

"Fahim’s passion for Nigeria and its youth was immeasurable. He believed young Nigerians are extremely bright and talented individuals who would flourish if just given the right opportunity.

I don't think this was a "killing from the club." This man was a club money laundering conduit through Nigeria. What the article doesn't say is that one of the main Nigerian money laundering honchos, Raymond "hushpuppie" Abas was captured and brought to the US not long ago. <July 4th 2020> He is probably singing like a bird. Along with the masterful shutdown by EO of the Hong Kong laundering syndicate, this is just another attack on the club's money sources. These two sides are in serious dialogue now. Very interesting to watch!


So this is indeed true on the arrest of this Nigerian fraudster, who not just "fairly stole his own money" but assisted others in moving even hundreds of millions of dollars around the globe.

Hushpuppi's lawyer pretends that this flaboyant fraudster actually made his money via his millions of instagram followers, and that the FBI "kidnapped" him illegally in Dubai and that he should therefore be freed to go to Nigeria.

Seriously.   It's an interesting story.

How it ties in with Saleh's murder in the strangest way, is interesting and with eyes open we may see more entanglements as time goes on.

Basically, America has been infiltrated with bad actors funded into positions of power by campaign contributions, and then when in power, by appointment.    Sorry women and minorities, and especially women minorities.....but it should be obvious that the level of corruption in USA governments and judicial systems have never been higher.

Those not traditionally holding power, will do anything to try to keep that power, privilege, wealth.

All these bad actors were put in place by mostly illegally gotten money, often laundered through legal businesses.   Of course, some Soros and Rockefeller money is also in play.

Its funny how the philanthropists never seem to run out of money????? 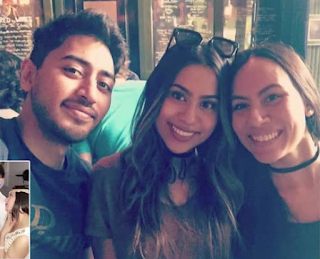 Fahim’s passion for Nigeria and its youth was immeasurable. He believed young Nigerians are extremely bright and talented individuals who would flourish if just given the right opportunity. Fahim also believed that technology can transform lives and improve safety and efficiency. He built Gokada to act upon these beliefs," reads the statement from Gokada.


I bet it was immeasurable  . Child trafficking generally requires that Esprit du core
after connecting with Clintons Billionaire foundation donor and her avoiding declaring Boko Haram a terrorist org..and then Israeli arms found in weapons Boko Haram caches in Nigeria..we can expect a ton more of these bone saw suicides and parachuteless skydives like Stevie Bings

Ghislaine Maxwell and her Jeffrey Epstein child sex “honey trap” operation—a blackmail threat conveyed to Secretary Clinton by her close associate Nigerian multi-billionaire Gilbert Chagoury—that gained Secretary Clinton tens-of-millions of dollars to her own money laundering scheme called the Clinton Foundation—and whose beyond shocking reason for was because Israel was supplying Boko Haram with weapons—that under international law made Israel complicit in kidnapping of 276 school girls in Nigeria.

was followed on 12 July with INTERPOL announcing it had captured an additional three more Nigerian money launderers belonging to this international cartel—critical to notice because it’s an obvious sign that Raymond “Hushpuppi” Abbas is “singing like a bird” to US prosecutors and is giving up everyone he can—which makes it more than understandable why the “message murder” of Fahim Saleh was sent out yesterday.

the significance of which was revealed during the New York City bail hearing when US prosecutors read in open court to a sobbing Ghislaine Maxwell a statement written by one of her Jane Doe child sex victims that chillingly said “She was in charge…She egged him on”.

and further proves that these US prosecutors are fast on the trail of “an international political, economic and financial cartel that branches from Nigeria to the United States via Lebanon, Dubai, the Netherlands and Italy”— 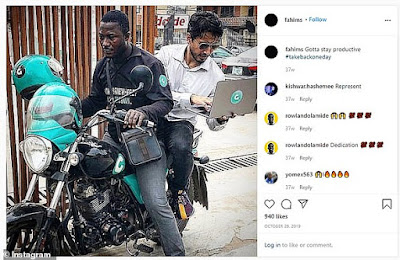 one of whose suspected cartel members was Fahim Saleh—a high-tech multi-millionaire living in New York City owning numerous companies around the globe, one of which is the Nigerian ride sharing service Gokada that was shut down in February—

after which the decapitated and dismembered body of Fahim Saleh was discovered in what the New York City Police have declared was a professional killing.  [Note: Some words and/or phrases appearing in quotes in this report are English language approximations of Russian words/phrases having no exact counterpart.]