Chrissy Teigen -- Examples of Her Degeneracy 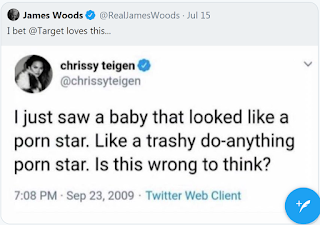 stock here: how to get the word out?

I am going
to publish this today, and at the same time, ask for people to send in more dirt on Chrissy so we can compile it before scrubbed from the internet!

Normies will have trouble wrapping their head around the very warped sexual habits and other weird personal habits of some rich and famous.

So cute Chrissy Teigen is a great example -- she has some weird sexual fetishes regarding children, and likely to be a true pedophile.

So I guess TEigen's black husband had sex with Barrack Hussein Obama before he was in the Whitehouse.......

In another tweet – which has also been deleted among a million others – she talks about how sexy toddler’s tummies are.

‘Are they meant to be this sexy?’ she exclaimed.

And in another shocking tweet she spoke of how glad she was a young boy was now at a pageant she was watching with her saying ‘Yummy…eye candy at last.’


After her tweets were exposed, Teigen blocked them and is now shifting the blame onto a ‘conspiracy theory’ group known as Qanon.

The group are labelled as ‘far-right warriors’ who are outing the’ deep state’ – a cabal of corporations and high ranking bankers and officials who are believed to worship Satan.


Teigen talks here about eating human “meat”. I’ve never referred to humans as “meat”, myself, but she does. 😳 Meat is, by definition, food pic.twitter.com/TnbI4ocBg5


She also admitted that she deleted about 60,000 tweets from her Twitter account “because I cannot f–king STAND you idiots anymore and I’m worried for my family.”  She now holds the record as Hillary Clinton is alleged to have only deleted 33,000 of her emails.  If Teigen had to delete that many tweets then it looks like she’s got things to hide.  She is known to be a combative loudmouth online, so she’s probably embarrassed by some of the gobbledygook nonsense she’s thrown out there over the years.


She’s deflecting if she thinks the problem is Q

Some of her tweets were pretty disgusting...Im a mom of 3, I would never talk about children in this way 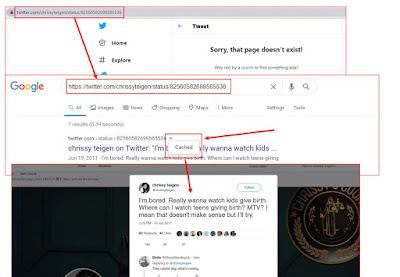 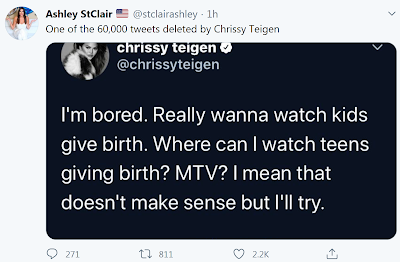