Disney -- 33 Ways That Disney Is Evil 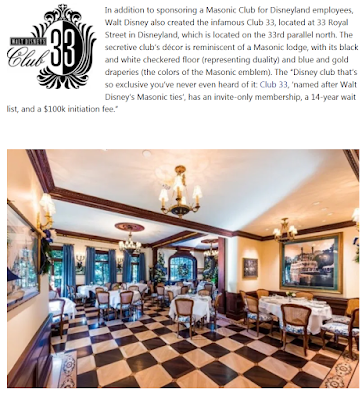 In this recent article, we post a video that shows gov people using 33 often in descriptions about SARS-2 (COVID) status.

This article does what I have been trying to get to for years, summarizing the evil nature of Disney.


King Solomon is a central figure among illuminated Freemasons. They believe that King Solomon held the ‘keys’ to the mysteries of dark magic, and with a “magic ring bearing the six pointed star, or seal of Solomon, gained the power to summon demons and spirits using his will to control them and command them to complete tasks.”

The number 33 was not just selected at random by the originators of the Scottish Rite. The Seal of Solomon, made up of two intersecting triangles, is considered a graphic representation of 3+3. It also plays a prominent role in Kabbalah. The number 33 is significant to Freemasons, as it represents “illumination” or enlightenment.
As a DeMolay

Legion of Honor recipient, there is little doubt that Disney understood the
significance of the number 33 in Freemasonry, and the creation of Club 33 was
intentionally designed in honor of the Freemasons.