In June or July 2019 I made a remarkable discovery which shall be described here also.

After detailed viewing of Epstein's Little St James island initially via Google Earth, I was always curious about the location of the "Tennis Court".    It was far far away from any residential structures, of structures of any kind.   There was zero shade, no place to take a break, no likely source of electricity or water.   It was odd.

At this point, I was pretty familiar with the island, so when his drone flew from the Residence side towards the Mamluk's style Temple, and went over an odd earthen embankment, I wondered where the "Tennis Court" was. 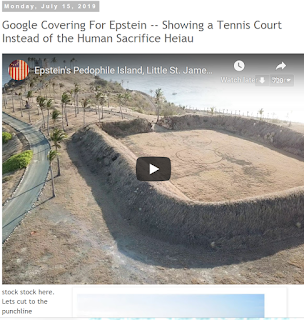 I Immediately had an imagery of a weird but favorite place of mine on Oahu, Pu'u O Mahuka Heiau (Temple, religious and ceremonial site).

The first time I visited, I knew without knowing, that this was a place for Human Sacrifice.   I later found out that was true.

Like the "Purity Washing" of the American Indians, academia treats the Hawaiian's in the same way, like they were pure and perfect and lived in harmony with nature.    Not so, quick example, Captain Cook, killed by the natives on the Big Island of Hawaii, served him up to the village as "long pig" which is the Hawaiian's description of cooking a human, Imu style in an underground earthen oven, like a Lu'au but with human, and they ate Captain Cook.    This factoid not easy to find, but come from a good buddy who was high up in the archaeology and Asian studies part of the Bishop Museum on Oahu.

Well at least they had the civility to cook him, LOL.   Captain Cook, that is funny, no?

So Google was "covering" for Epstein, and why was it so important not to show the earthen bermed field? 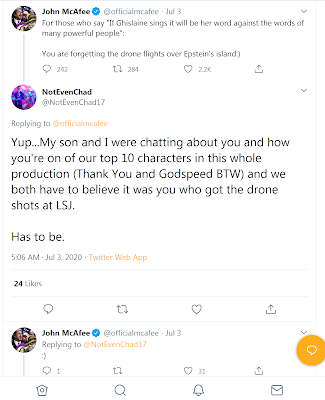 Read the story linked above for more on that.   At times in history the "Heiau" was landscaped as a
religious design also seen at the Epstein New Mexico ranch.

But this story started out as a Tribute to John McAfee, the computer virus guy turned activist, turned drone operator.   It sure appears that McAfee is actually Rusty Shackleford, the famous Epstein Island Drone Man.

For those who say "If Ghislaine sings it will be her word against the words of many powerful people":

You are forgetting the drone flights over Epstein's island:)
— John McAfee (@officialmcafee) July 3, 2020


So Kudo's to John McAfee!

Even today, Google is still showing the Tennis Court!  And what is up with that green patch across the road from the Heiau?   It is throwing a shadow.    Their is no water works in that area, so it means that they put water on a vehicle and watered it often.

Some special plant needed for their "rituals"?   Any one got ideas? 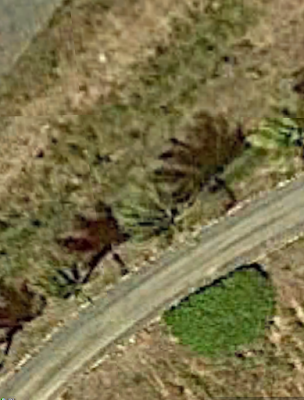 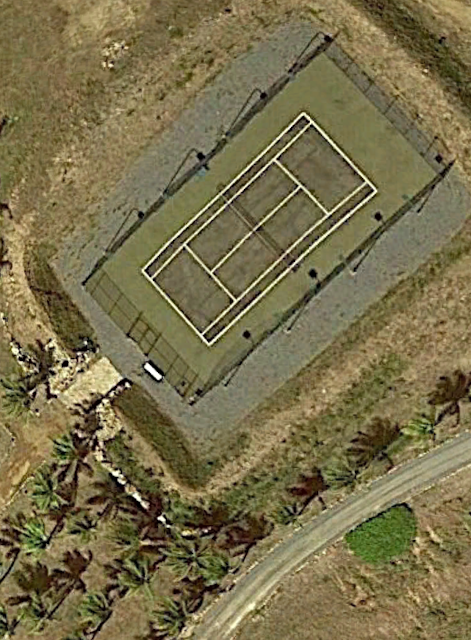