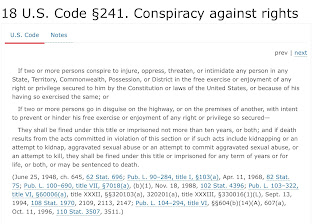 stock here, we have wrote in the past on various codes that obviously apply, and are obviously not
being enforced.

If two or more persons conspire to injure, oppress, threaten, or intimidate any person in any State, Territory, Commonwealth, Possession, or District in the free exercise or enjoyment of any right or privilege secured to him by the Constitution or laws of the United States, or because of his having so exercised the same; or

If two or more persons go in disguise on the highway, or on the premises of another, with intent to prevent or hinder his free exercise or enjoyment of any right or privilege so secured—

5 people organize a freeway shutdown holding-hands-cuck-fest on the I5 North in Central CA. They manage to garner 30 people to attend so we've got 35 now holding hands and jerking off into the wind while cars are forced to endure the un-mandated freeway shutdown. Someone holding hands decides they don't like what some of the car-owners are yelling at them and begin to throw rocks, and beat the side of his vehicle with a crowbar.

The owner of that car is now in a state of fear and hits the gas, running over and killing 3 of the hand-holding protesters.

Would the car owner have a case here, to place blame the organizers of this event for these 3 deaths that have resulted, along with all inciters of violence? This, to me, sounds like an argument that can and should be used to prosecute the unlawful assemblers and the unruly individuals that accompany them.


If someone blocks your progression on a roadway, even and maybe especially a city street, a logical person might think the next thing is that the group breaks their window, drags them out and beats them, that could happen in seconds.   Or they could shoot you straight out.

Someone with a knife, at 12' can kill you before you can draw and shoot.   So that is a known limit, come within 12' of me and you die.....similar thinking would prevail at a fair trial, as long as you don't get a lib judge, so your life is at a 50% crap shoot.

I kind of get it....if a governor restricts travel from another state, they are restricting trade and therefore breaking this law.