St Louis "Karen" Kim Gardner Indicted Under Deprivation Of Rights Under Color Of Law...We Can Dream 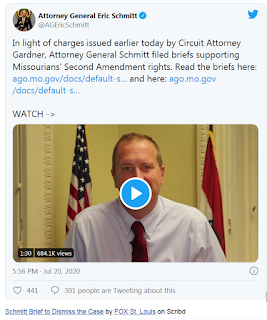 It's time to push back hard.   I think an armed open carry militia marching on the St Louis Mayors office, prosecutors office, and homes is warranted.

They want people to be scared to even defend themselves.     They need to be prosecuted for over reach under Color of Law

I entered the case seeking a dismissal.
As AG I have a duty to protect the fundamental rights of all Missourians including the right to keep & bear arms in self-defense of one's person & home.

A THREAD
The right to defend one’s person, family, home and property has deep roots in Missouri law. Self-defense is the central component of the right to keep & bear arms, which receives the highest protection from the MO Constitution. #2A
MO statutes specifically authorize citizens to use firearms to deter assailants & protect themselves, their families & homes from threatening or violent intruders. #2A
A highly publicized criminal prosecution of citizens for exercising these fundamental freedoms threatens to intimidate & deter law-abiding citizens from exercising their constitutional right of self defense.
My job as AG is to protect the fundamental rights of all Missourians, including the right to keep & bear arm in self defense of one’s person and home. This case casts an ominous shadow over those fundamental rights.#2A
The prosecution sends a powerful message to all Missourians that they exercise their fundamental right to self defense at their peril. Missourians should not fear exposure to criminal prosecution, even prison time, when they use firearms to defend themselves and their homes.
As AG I am vested with authority to enter this case for several reasons: 27.060 grants the AG authority to intervene in actions that threaten the interests of all Missourians.
I have a duty to protect & defend the const & statutory rights of Missourians including the Constitutional right to keep & bear arms & the right to self-defense by way of our Constitution & Missouri’s Castle Doctrine.
I have entered the case and filed a brief seeking a dismissal of the case to ensure ALL Missourians who wish to exercise their fundamental right to defend themselves, their families & their homes without fear of criminal prosecution. #2A
This case is extraordinary. Based on widely reported facts, this prosecution targets conduct explicitly protected both by the MO Constitution & statutes setting forth the “Castle Doctrine” of self-defense. #2A
In other words this is not just a case of the gov’t retaliating against a citizen for exercising a fundamental right - which is bad enough - its also a case where the local prosecutor believes that exercising that fundamental right is - itself - a crime.
This political prosecution is not based in law and as long as it continues it will send a public message to ALL Missourians: If you dare to exercise the fundamental right to keep & bear arms in defense of family and home, you may be prosecuted and sent to prison. #2A
The Right to Keep & Bear Arms in Self-Defense of One’s Person & Home Receives the MO Constitution’s Highest Level of Protection. Self-defense is the “core lawful purpose” & the “central component” of the right to keep & bear arms in both the #2A & MO Const.
See Heller decision.
This “core and lawful purpose” includes “the right of law-abiding, responsible citizens to use arms in defense of hearth & home.” See Heller.

The right to keep & bear arms is a “fundamental right” that is “necessary to our system of ordered liberty.” See McDonald case. #2A
The Founders viewed the right to keep & bear arms in self-defense as a natural right that was inalienable.This recognition predated the adoption of the US Constitution & had deep roots in English concepts of liberty forged in the Glorious Revolution of 1689. #2A
Thus under principles of English law that the Founders viewed as fundamental, the right to keep & bear arms was “a recognition of the natural right of defense of one’s person or house as part of the law of self preservation & central to the #2A."
The Founders knew the right to keep & bear arms, not the gov’t. is the citizens first line of defense against physical attack. Thus, this right received its greatest emphasis during times when gov’t could not not trusted to protect citizens’ personal security. #2A
The landmark Heller decision mentions its importance for anti-slavery advocates & post-civil war firearms for self-defense was often the only way black citizens could protect themselves from mob violence.
If anything, this right is even more deeply rooted in Missouri’s unique history & tradition. The right was explicitly in Missouri’s first Const of 1820 stating; the “right to bear arms in defence of themselves & of the state cannot be questioned.” #2A
Mo has even expanded this language over the years including in 2014 when the overwhelming majority of MO voters including the language “home, person family & property” subject to “strict scrutiny.” #2A
It goes on, “The state of MO shall be obligated to uphold these rights & shall under NO circumstances decline to protect against their infringement.” #2A
By Enacting the Castle Doctrine of Self-Defense, MO Statutes Explicitly Authorize the Use of Firearms to Defend One’s Person, Family, Home, and Property From Threatening and Violent Intruders.
Missouri has adopted one of the strongest versions of the Castle Doctrine in the country. This Doctrine is not merely a creature of statute, but deeply rooted in the Constitutional right to keep & bear arms. #2A
Section 563.031 specifically authorizes MO citizens & homeowner to protect themselves from illegal invasions & intrusions into their homes & private property. It establishes 3 principles: #2A
1. Missourians may defend themselves & others using physical force (including firearm)to deter the imminent use of unlawful force by another person;
2. MOs may use deadly force against a person who unlawfully enters or attempts to enter private property owned by another & threatens to use unlawful force against another; 3. MOs have no duty to retreat from their own residence or property when threatened by an unlawful intruder
Further, the Castle Doctrine specifically shields Missourians who act in valid self-defense from prosecution for unlawful use of a weapon by exhibiting a weapon in an angry or threatening manner under 571.030.1(4). #2A
In fact 571.030.5 states: it SHALL NOT APPLY TO PERSONS WHO ARE ENGAGED IN A LAWFUL ACT OF DEFENSE PURSUANT TO SECTION 563.031. #2A
Thus, this is not a case where the Ds must raise a self-defense as an affirmative defense or assert the exercise of a const right as a defense to justify conduct that otherwise would constitute a crime. Exhibiting a weapon in an act of valid self-defense IS NOT A CRIME AT ALL.
The law is clear and unambiguous, if an intruder invades private property & threatens to harm the homeowner or another person, a citizen may defend him or herself. To display firearms in self-defense as in 563.031 is not a crime & it should not be charged as a crime at all. #2A
The Highly Politicized Prosecution of Missouri Citizens For Exercising Their Right to Keep and Bear Arms in Self-Defense May Intimidate & Deter Other Missourians From Exercising Their Fundamental Right of Self-Defense.
This case reflects the opposite of the state’s constitutional obligation under Art. I sec 23 to “uphold these rights” to keep & bear arms self-defense & “protect against infringement.” #2AShallNotBeInfringed
In fact this political prosecution sends a powerful & dangerous message: You exercise you right to keep & bear arms at your own peril. If you do you may find yourself in prison. #2A
This case has significance that extends well beyond the parties. The pendency of this case chills & deters all citizens from exercising one of our most fundamental right, which receives the highest level of protection in Missouri’s Constitution & laws. #2A
On behalf of all Missourians who wish to exercise their right to keep & bear arms in self-defense of their persons, homes families & property & as AG of the great state of MO I'm seeking a dismissal of this politically motivated case at the earliest opportunity. #2A END THREAD
Posted by Stock at 9:38 AM