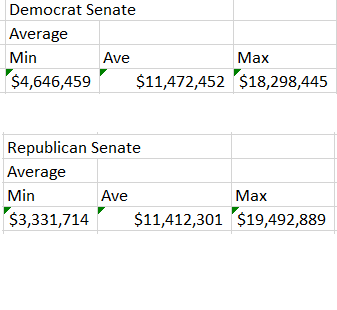 stock here -- per Karlin "you ain't in the club"

I hear their salaries are around $180,000 per year, not bad.   But they also live high off the hog.    So how does someone like Feinstein increase their wealth by $20M MORE in 10 years?

HERE IS THE SPREADSHEET IF YOU WANT TO DOWNLOAD


My prior financial advisor, who was a bit too politically outspoken, was targeted by Hawaii tax officials.    Not just to an audit of his tax return, but an "economic audit" in which every single asset and liability down to the penny was examined.

Economic Audit --- Lets make it mandatory for each member of Congress, every year.

How did my advisors case come out?   Well on income of about $1M per year (he showed me his actual returns, which is amazing), the auditors could not account for $12,000, so they thought he had not reported $12,000 in income from at this point an unknown source.

So they gave him an opportunity to re-examine all his books, or to accept the $12,000 as being added into his income.   It could be hundreds of hours to reconcile that $12,000 so he just accepted it rather than fighting it.

Moral of the story?   If this was done to our politicians, it would eliminate a lot of graft, and thus, a lot of corruption and corporate and "philanthropic" abuses of the system.

notable notes:
One of the most horrible states in our Union is Virginia, lots of DC swamp critters live in Virginia too.   Lots of military and intelligence  too.

Potentially the poorest member of Congress?   Kamala Harris may be up to $10M Debt. 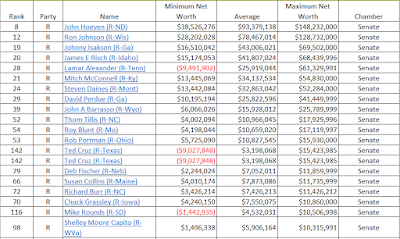