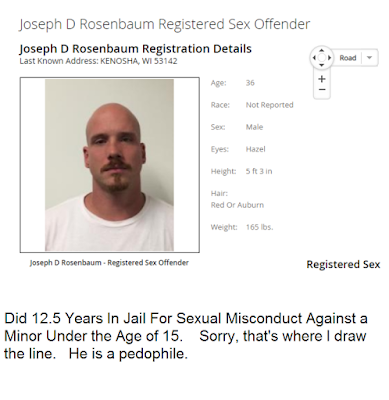 And reader James chimes in with this salient point

All three rioters who were shot; were assaulting a MINOR. Actually; Aggravated Assault against a Minor; in the case of the two involved in the street encounter. Haven't heard a word about that.

The accused, Kyle Rittenhouse, is from Antioch, Illinois, just 21 miles from Kenosha, Wisconsin.
Rittenhouse traveled to Kenosha with his AR-15 in order to protect small business owners and citizens who were being victimized after being abandoned by their state government and police.
Footage obtained by anti-extremism watchdog AntifaWatch shows the first shooting.

In the video, a masked man named Joseph D. Rosenbaum is shown chasing Rittenhouse and throwing what some have claimed may have been an improvised explosive, but this has not yet been confirmed. Rittenhouse then shot Rosenbaum in the head as he charged and tried to take his rifle, an injury the attacker later died of.

Earlier in the night, Rosenbaum, who is Jewish, was shown violently antagonizing the armed men, shouting “Shoot me, Nigga!”

After Rosenbaum was shot, a mob of anarchists pursued Rittenhouse as he attempted to flee. The young man then fell to the ground as the “antifa” members began attacking him. Rittenhouse opened fire against two of the attackers, one who was armed with a handgun.

One member of the gang, Anthony W. Huber, died after being shot in the chest. The armed assailant, Gaige Paul Grosskreutz, suffered a gruesome gunshot wound to the arm but survived.

The media has jumped into action to paint Rittenhouse as a white supremacist domestic terrorist and the anarchists who were shot as innocent “peaceful protesters.” But the facts bring this narrative into question.
Posted by Stock at 12:56 PM