I have seen in several places that the Ammonium Nitrate was stored in hanger 12.
Is that new hole in the port hanger 12?

I would think not, as a humidity over 59% the AN can turn into a giant solid clump.    That happened before in a major accident, and they tried to use dynamite to break it up. 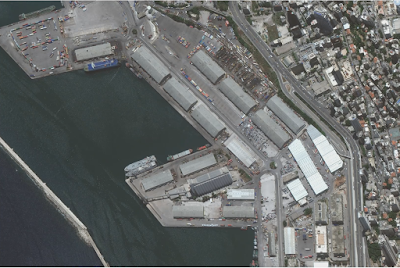 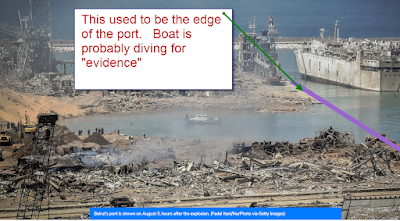 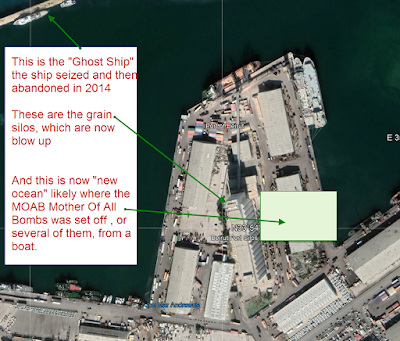 The explosion in Beirut’s port was a human tragedy. Hundreds died in the blast, and thousands more were wounded. The victims transcended Lebanese society: Christians, Sunni, Shi’ites, Druze, supporters of Hezbollah, and Hezbollah’s most diehard opponents. Conspiracy theories erupted — Hezbollah munitions stored in the port, an Israeli airstrike, even a nuclear bomb — but the reality was more mundane. The reason for one of the largest accidental explosions since the 1917 Halifax explosion and the Texas City disaster three decades later was simple incompetence: Authorities offloaded highly explosive cargo into an unsecured warehouse, largely forgot about it, and then allowed welders unaware about the danger they faced into the warehouse to conduct repairs.
The government has put port managers under house arrest while the investigation gets underway. But if there is any lesson from recent Lebanese history, only the weak and never the powerful face accountability for their actions. That was what occurred when Hezbollah detonated a bomb in the heart of Beirut in order to assassinate former Prime Minister Rafic Hariri. In the aftermath, Lebanese were outraged in much the way they are today. The resulting Cedar Revolution forced the withdrawal of Syrian troops and gave Lebanon a chance, albeit one squandered by Lebanon’s self-serving elite, at a better future.
The evidence in the Hariri bomb pointed overwhelmingly to Hezbollah as a group and to specific operators within its network. Hezbollah, through a combination of overt threats and posturing and covert pressure, largely sidetracked the tribunal. Rather than become a mechanism for justice, Lebanese fearing the cost of holding Hezbollah to account transformed it into a tool for obfuscation and delay.
What happens in Lebanon never stays in Lebanon. While Hezbollah and the Saudi monarchy are on opposite sides of the Middle East’s ideological, sectarian, and diplomatic divide, Hezbollah’s ability to shirk accountability for the murder in broad daylight of one of post-civil war Lebanon’s most prominent and popular leaders likely inspired Saudi Crown Prince Mohammad Bin Salman to believe he could act with similar impunity against journalist Jamal Khashoggi.
The best thing the United States and broader international community can do right now is ensure accountability as Lebanon picks up the pieces and rebuilds. There should be judicial accountability not only for authorities in the port who may have been negligent but also for the political leaders who turned a deaf ear to warning about tons of ammonium nitrate stored within a stone’s throw to the heart of the city. There should also be accountability and transparency to ensure that groups like Hezbollah responsible for so many ills in Lebanese society today do not enrich themselves off the construction contracts that will flow into the city, and that elite politicians and power brokers do not likewise siphon off funds as they so often have in the past.
Beirut was once the Paris of the Middle East, and it is easy to fall in love with the city that represents the Middle East at its cosmopolitan best. That the Lebanese have suffered so much both for reasons beyond their control and because of the fickleness of their political machine is a tragedy. Some Lebanese will try to blame Israel, others Syria, and others Iran for their plight before Tuesday’s events, and for their desperation today. Only, however, when the Lebanese people shirk off corrupt and incompetent elites and a political culture where too many act with impunity will the country thrive, and its people achieve the justice they so much deserve.

As the port of Beirut — including the grain silos that stored about 85 percent of Lebanon’s cereals — was totally destroyed in Tuesday’s deadly explosion, the country now needs to rely on the port of Tripoli, which is unequipped to cater for the needs of a nation that largely relies on imported food.
This is a tragic moment for Lebanon. However, this tragic moment comes during a very tense period. The explosion took place just three days before the day the entire country has been waiting for: The verdict of the international tribunal on the 2005 assassination of former Prime Minister Rafik Hariri. Though the verdict is not out yet, it is expected to incriminate Syrian President Bashar Assad and his ally Hezbollah. Hezbollah has been on shaky ground for a while now amid increasingly vocal opposition. The most recent flagrant opposition was from the Maronite Patriarch, Cardinal Mar Bishara Boutros Al-Ra’i, who last month accused Hezbollah of dragging Lebanon into a regional crisis and called for the country’s neutrality.

Hezbollah has been losing popularity and facing increasing resistance since last year. To start with, it was the group that was most alarmed by the protests that erupted on Oct. 17. The current power structure provides the group with the necessary cover for its operations. Any change toward a transparent, non-sectarian and accountable government would lead to the weakening of Hezbollah.
It has been the main agent pushing back against the protests. The followers of Hassan Nasrallah and his ally the Amal Movement went down to the streets to beat up and intimidate protesters, while the government, in many instances, sidelined the army and prevented it from protecting the peaceful demonstrators. The coronavirus disease (COVID-19) was a welcome gift for the government, as the enforced lockdown strangled the protests, which slowly started to lose momentum. Fatigue and the dire economic conditions made each citizen more concerned about fulfilling their basic food needs than protesting for the collective good of the country.

The visit of French Foreign Minister Jean-Yves Le Drian to Lebanon last month resulted in a clash with Prime Minister Hassan Diab, who refused the French calls for reforms, claiming that 97 percent of the promised reforms have already been conducted. While bragging about his achievements, he neglected to mention that the currency had lost 80 percent of its value, people are unable to access their bank accounts, and basic goods have tripled in price. At the same time, the little funding left with the state is used to import subsidized fuel and flour. However, these goods are then smuggled to Assad, Hezbollah’s ally, while Lebanon plunges into darkness due to electricity cuts. The Lebanese people, who were hoping for international aid, have been let down by the government, which used various pretexts to justify noncompliance with the Internal Monetary Fund’s requirements.
Though Hezbollah has used various tools to deflect the blame for the current situation, and its government has given many justifications for not conducting the required reforms, popular anger has been brewing and Hezbollah has regularly found itself defending an indefensible position. People are very upset as they feel their country is being hijacked by Hezbollah, which has imposed a puppet government and has been the main stumbling block to reforms and international relief.
The group has been very anxiously waiting for the tribunal’s verdict. The government is also very nervous as it will have to follow the instructions of its master and reject the findings if it incriminates Hezbollah and Assad, which would further fuel popular anger. To circumvent the effects of the verdict — as the government does not really need another wave of protests — it has announced another nationwide lockdown starting on Thursday, again using its friend COVID-19 as the perfect pretext.
Now, with all eyes on the verdict, this massive explosion occurs. Was that a mere coincidence? While investigations are underway and the direct cause of the explosion was the chemical material that was unsafely stored in a warehouse, the timing makes the plausibility of it being an accident very questionable.
Popular anger has been brewing and Hezbollah has regularly found itself defending an indefensible position.
Dr. Dania Koleilat Khatib
Nasrallah, who was supposed to give a fiery speech, kept quiet and adjourned his talk to mourn the dead. Not everyone is buying into the accident narrative. However, all alternative narratives lead to Hezbollah. Some on social media say they heard a jet and think that Israel struck the warehouse, which was storing ammunition for the group. Nevertheless, Israel denied any involvement. Others posted pictures of the explosion with the turban of Nasrallah superimposed on top of the smoke, with the title: “We know it’s you.” Their rationale is that the explosion was a tactic to shift the public discourse from the verdict to saving the stricken city.
Regardless of whether it was an accident resulting from the negligence of the government installed by Hezbollah or whether it was instigated by an external actor, Hezbollah is going to be blamed. With all eyes set on Friday’s verdict, Hezbollah is in a precarious situation.
Dr. Dania Koleilat Khatib is a specialist in US-Arab relations with a focus on lobbying. She holds a PhD in politics from the University of Exeter and is an affiliated scholar with the Issam Fares Institute for Public Policy and International Affairs at the American University of Beirut.
Posted by Stock at 2:14 PM