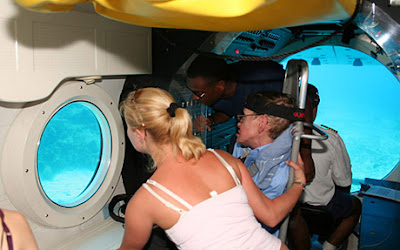 stock here.
The Photo of the Strap Top Copper Blond Hottie acting as Hawkings "guide" all day and night, has been trending as a top post on my site lately.

I wonder who she is?  Anyone know?

It seems she is the same one in Picture 2, tending to Hawkings at night.    Note the couple on the right....they really hate to be in this picture, now why is that?


Why is this important?   Academia and Science have been corrupted just as badly as the DOJ and our local and district judges and prosecutors.    And why has tuition gone up 400%?   Partly to enslave the graduates with debt, and no out through bankruptcy.    This make them also "eligible" for persuasion into a certain attitude and actions.    I mean you can't honey trap the entire country. 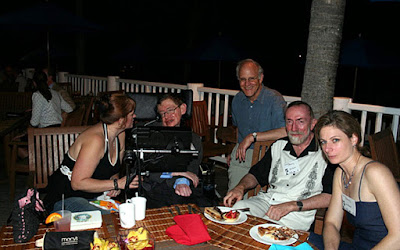 So is the DOJ moving into a phase of 4D Chess?    They have indicted 9 high level professors from top academia, who were getting payments directly from China, not reported the relationship with  an outside country (a crime in itself) and not reporting the income (tax evasion).   The average payment (or shall I say bribe) was $700,000 a year!

Thats a boat load of money.    Enough to get neo-liberal America hating academia to turn over the top research funded with USA tax dollars, direct to China under their "1000 Talents" program.


Keep that 1000 number in mind.    Any big "program" of China likes to use 1000 in it.   There will be
more espionage revealed, with American's complicit in the actions.     The 2 offenses above serious crimes.

But when the motivation is treason, these weak professors will likely sing to high heaven to "just" plea bargain a 10 to 20 year sentence, and not death.


read to the bottom here from hawk4.pdf where they literally jump the shark.

First published April 4, 2018
I won this one.  I have won a lot of them, but this is the first one where they have pretty much admitted defeat.  And the funny thing is, I won it several months ago, but just found out today.  I became aware of an article from The Daily Mail in London, published January 12, 2018, entitled “Has Hawking Been Replaced by a Puppet?”   Just so you know, The Daily Mail is the second largest newspaper in the UK, bested only by The Sun.   Although I am not mentioned by name, the article is clearly based on research I did in April of 2015 in this paper called “Stephen Hawking has Died and been Replaced”.  They simply repeat many of my points there, and don't even bother to rebut them.   They end by basically admitting I am right:
The motive is there. The pictures speak louder than words. So could it be that the conspiracy theorists are right this time?
Yeah.  Right this time and every other time, as people are figuring out.  Do you think it is a coincidence that this article came out in a major newspaper and Hawking “died” two months later?  I will tell you: it isn't a coincidence.  They realised the game was up and ended the project.   It's that simple.
However, they are still trying to cover their tracks.  I wanted to add this information to my original paper as an addendum.  But I couldn't do that.  Do you know why?  Because I published a pdf, but you can't edit a pdf.  To make changes, I have to go into my OpenOffice odt document, and when I did that I found that all the images were gone.  Strange, since they link to my own local files.  All those files were listed as being in my Downloads file, but they weren't there.  So how did they get into my Downloads files?  You tell me.  I am not a computer geek.  Maybe they hacked in when I forgot to close FileZilla?   Seems like they would have deleted the pdf as well, but maybe access to downloads is easier than access to documents?
Impossible for me to say.  Some will just say I deleted the files myself by mistake.  OK, did I also delete the same pics all over the web?  I just ran a search for pics of Hawking, and most of the ones I used have been deleted.  But I did find a few new ones, like the one under title above.  Is that the worst fake you have ever seen?

Look at that guy!  He looks like an actor from MadTV trying to impersonate the Hawking impostor.
You can see right through him.  He is even younger than the Hawking impostor.  I think the original Hawking impostor was someone who was actually suffering from ALS or something similar.  He wasn't Hawking but he wasn't faking his illness, whatever it was.  But that guy above isn't fooling anyone. He's just screwing up his face.
Best guess is their impostor finally died and they couldn't risk a second substitute after The Daily Mail piece.  They realized the guy above wasn't going to fool people who were now on the lookout for a con.
So what is the next subject where they are going to admit I was right?  Place your bets now.  Manson? Kennedy?  Pi=4?  Probably not.*  Maybe something to do with Elvis or the Beatles.  Or possibly something to do with charge or light.   They have been admitting I was right about charge and light for several years, though again they don't bother to give me credit or mention me by name.  I expect the admissions to become even clearer and more prevalent as the months and years pass.  Maybe someday they will recognize we will all get along much faster if they quit trying to bury me and just hire me.
You will say I am making that hard for them to do.  Why would they hire someone who keeps blowing all their top projects?  Um, maybe to keep me from blowing all their top projects?  At some point they will realize it is more profitable (and far less risky) to do real science than fake science.  Now that I have given them a unified field equation and corrected all their math for them, they can get back to business.
I will be told that is overly optimistic, and maybe it is.  If I were really a betting man (which I'm not),  I would bet on the paper of mine that is most likely to be used by one arm of Intelligence against another arm.  That is what happened here, you know.  The Daily Mail obviously wasn't trying to prove me right or do me any favors.   They simply used my research to destroy the faux-Hawking.  Faux-Hawking was being used by entityA to achieve goalX, and their rival entityB wished for goalX to fail.    So look for another DHS-type project that CIA wants to fail, where one of my papers would help them do that. Plus, it needs to be a project the outing of which won't bring down the whole house of cards.  Maybe Ligo?  The LHC?  The FPP?  The Kavli Foundation?  As I said, I am not a betting man, and I like to be surprised, so I will leave it.  We will just keep our ears open.
Addendum July 4, 2018:  A reader just sent me another picture of Hawking number 3, showing us again why they had to end the project. 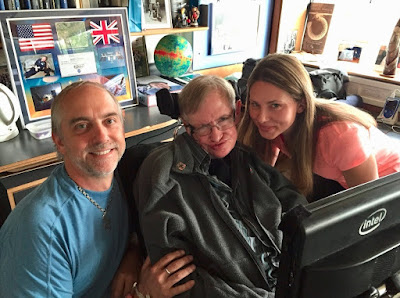 That's the same guy as in the pic under title, but it isn't the real Hawking or Hawking #2.  He is way younger.  Look closely at his mouth, noting that we can't see the bottom teeth like we should.  This is just an actor who somewhat resembles Hawking #2, and who learned to screw up his face in the right way.  But it is obvious he is just screwing up his face.  Also notice they have dressed him in that huge bomber jacket, so you can't see his body, neck, or hands.
Who are these people?  They are the Garriots, alleged “owners of the Luna 21 lander and the Lunokhod 2 rover making them the world’s only private owners of an object on a foreign celestial body”.  Since this photo is a fake, we may assume that story is fake as well.  Laetitia Garriot was an investment banker at Goldman Sachs, which is more evidence in the same direction.  She then became a principal at hedge fund TPG-Axon.  She later founded Escape Dynamics, the spaceplane company.  So she already looks like another Elon Musk, fronting a lot of fake companies and fake projects.  Richard Garriot is a vidgame honcho who allegedly spent time on the International Space Station, indicating that was also a fake.
For more evidence in that direction, study this groaner of a photo: 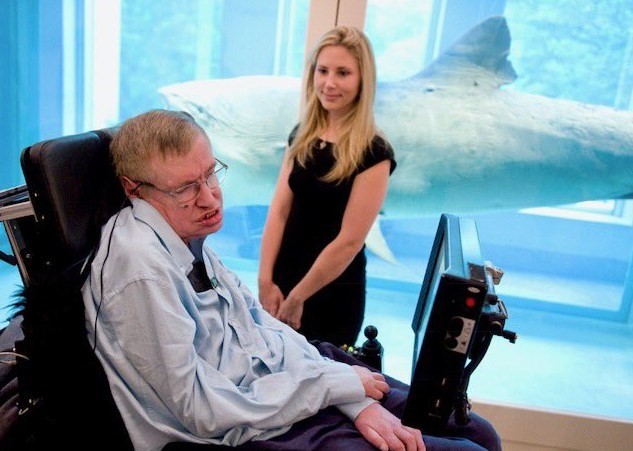 That's supposed to be Laetitia again, but she is now with Hawking #2, not #3.  However, that is obviously a paste-up.  What is she looking at?  Her eyes aren't focused on Hawking, are they?  That's because she and Hawking aren't really there together.  It is a composite photo with the older Hawking. They realized Hawking #3 wasn't passing muster, so they had to go back to Hawking #2 and paste up a photo.  Since they were already in Photoshop, they figured why not paste in one of Damien Hirst's sharks in the background.  They figured anyone buying this story would buy anything, so they could have pasted in the Loch Ness monster in the background, swimming by smoking a cigarette and wearing a bra and panties.
In other words, don't believe anything you read about the Garriots.
*Although I do expect them to admit pi=4 in my lifetime—in kinematic situations, you know—I don't see it happening this year or next.  Insiders already know I am right, and have already corrected their equations, but it may take years for them to admit this to the public.   I don't expect to see a report in the mainstream media this decade.
Posted by Stock at 7:53 AM