Portland Assassination Report By First Hand Interview, Shooter Catched and Released A Month Ago With So Called Illegal Pistol 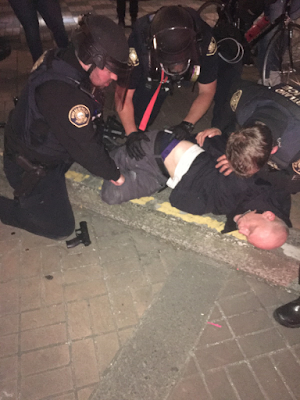 stock here, just going to throw this up, hope you can do / tolerate Twitter
----------------------------------------------
A newish story to me, how the murderer was arrested a month ago with an "illegal" loaded pistol in public.   In our world of no reporting reporting, no mention of why the gun was "illegal".   Open carry is the law in Oregon, so was he open carry or concealed without a permit?   If open carry, was there some ruling against him that would make the carry illegal (like domestic abuse, or still under probation for a felony)

Facts matter.   And there are so few.   I looked, I couldn't find the answer, MUCH LESS, even anyone else even asking the right question.

Of course he was just released with no prosecution.

Second review, there is some sketchyness about all this.   No mention of the apparent pepper spray in the interview.   Seems odd to avoid that question.    Gov Kate of course, call the armed "far right" the cause of him getting shot.     Got that?

Don't forget the chance for double reverse false flags.   Veteran observer know that "false flag" doesnt mean that it didnt happen, just means that it was done under false pretenses.


Does how exactly does friendly fire occur and sound to a 3rd observer that had trouble figuring out where the shooting occurred, did a 360 turn to finally lock in?
Quote Tweet
MJ
@MJCHuzz
· 2h
Replying to @alljustchance @Summer48985575 and @SpaceForceUSA_
Exactly what I heard too. Sounds like friendly fire. Anyone who listens to this video or even watches it will figure this out quick.