Scientific Data On Connection Between Liberalism and Mental Illness

is it the chicken or the egg? 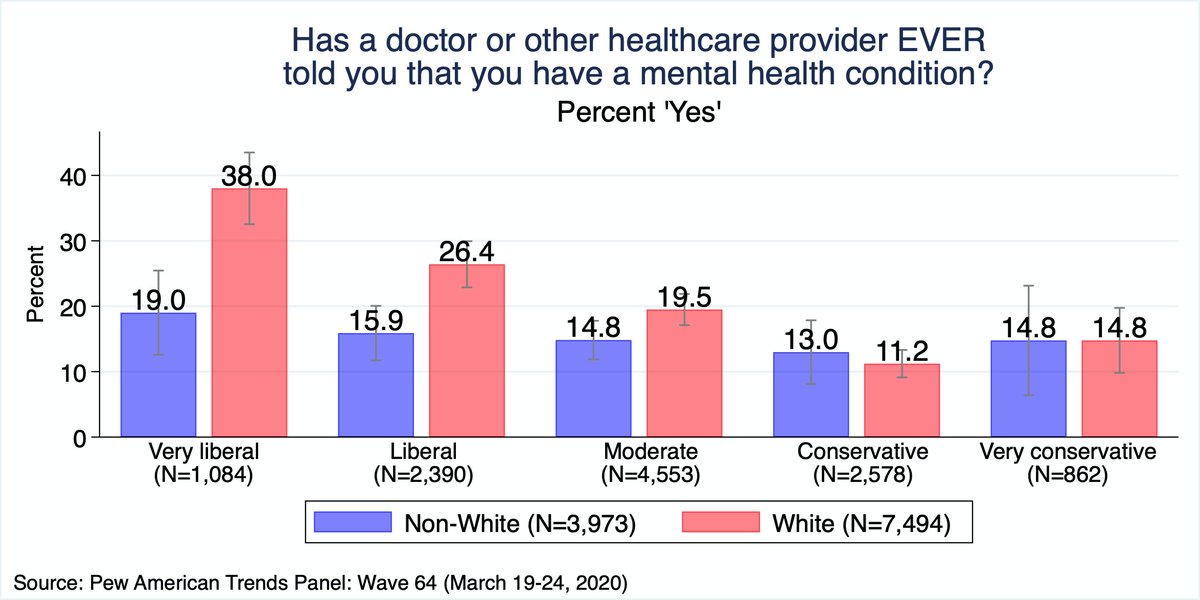 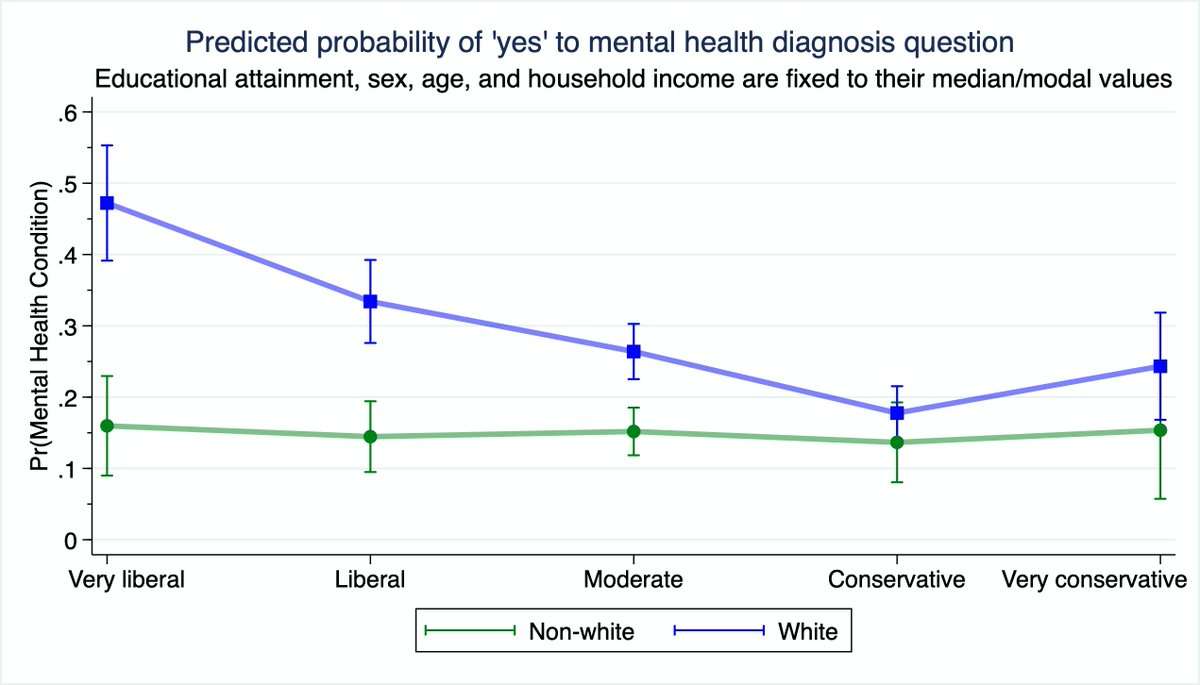 3/n We next turn to mean responses to this battery, which asks about the frequency at which respondents experienced specific mental health issues over the previous 7 days

4/n The differences are more modest here, but still significant 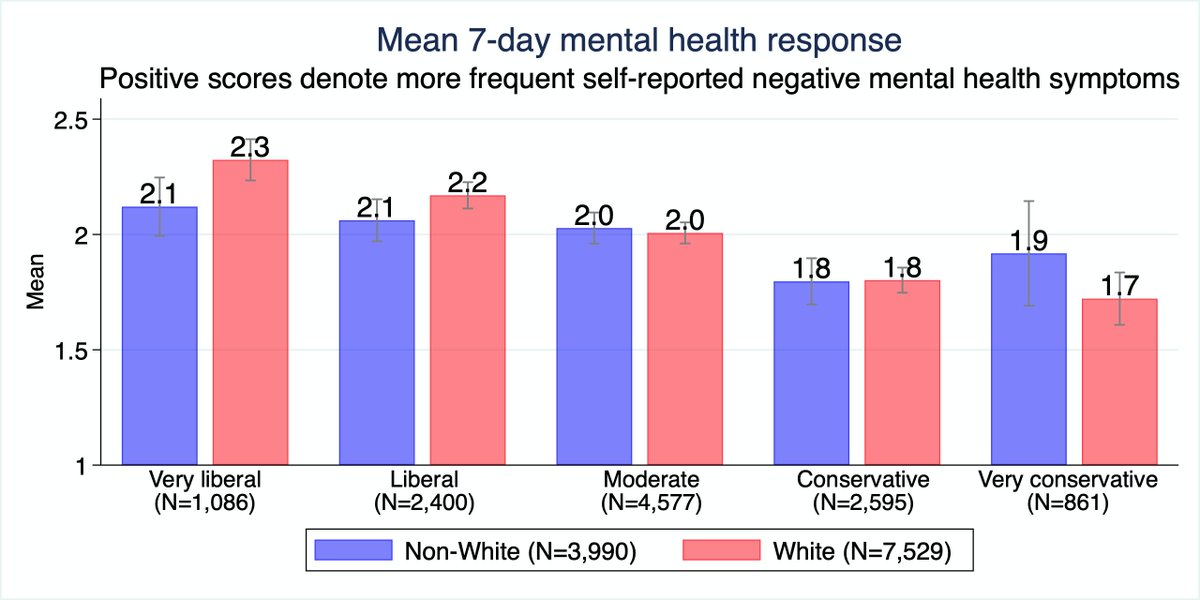 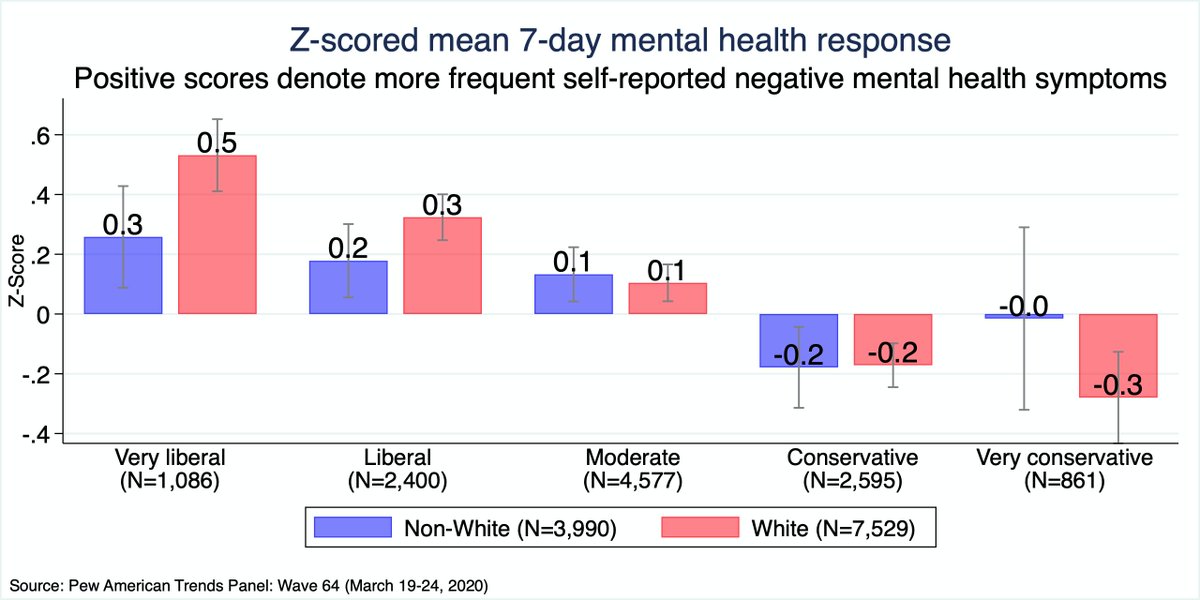 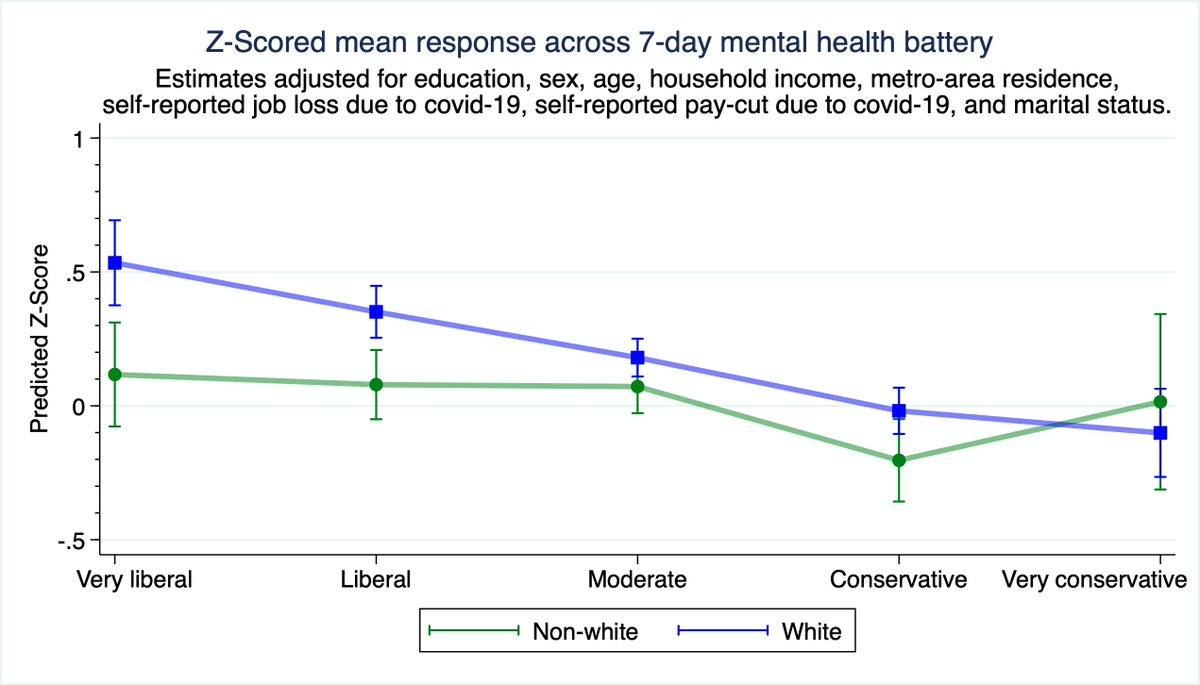 6/n However, entering the 'mental health diagnosis' variable into the model does (perhaps naturally) narrow the difference. 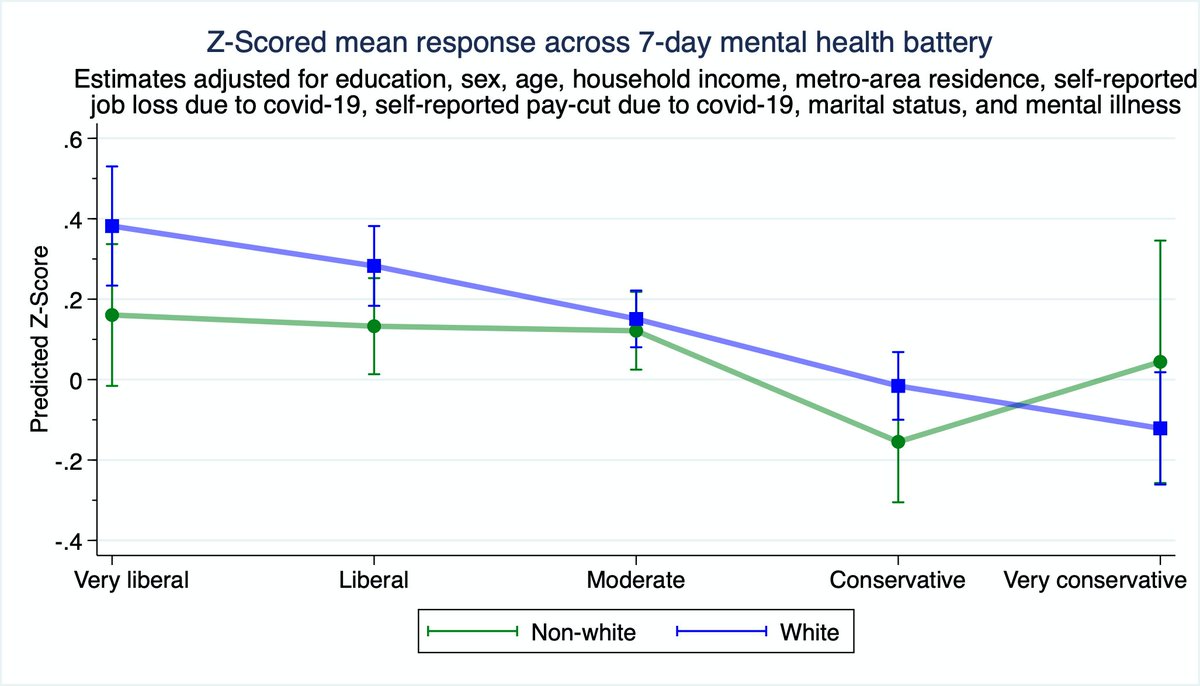 7/n In other words, at least some of the differences in the covid-mental health battery between white liberals and others are accounted for by the former's higher likelihood of being diagnosed with a mental health condition.
8/n It's possible that the disparities in self-reported diagnosis are simply or partly a function of white liberals being more likely to seek mental health evaluations. I don't have the data to answer this question. But given that they also tend to score higher on neuroticism..
9/n (and, not to mention, score lower on life satisfaction/happiness), I think at least some of this difference is genuine.
10/n I didn't write this thread to mock white liberals or their apparently disproportionate rates of mental illness (and you shouldn't either). Rather, this is a question that's underexplored and which may shed light on attitudinal differences towards various social policies.
11/n Overall, and with one exception (white moderates), those in 18-29 age group are more likely to report being diagnosed with a mental health condition. The differences among white liberals, though, are striking: almost half of white liberals in this cohort report a diagnosis. 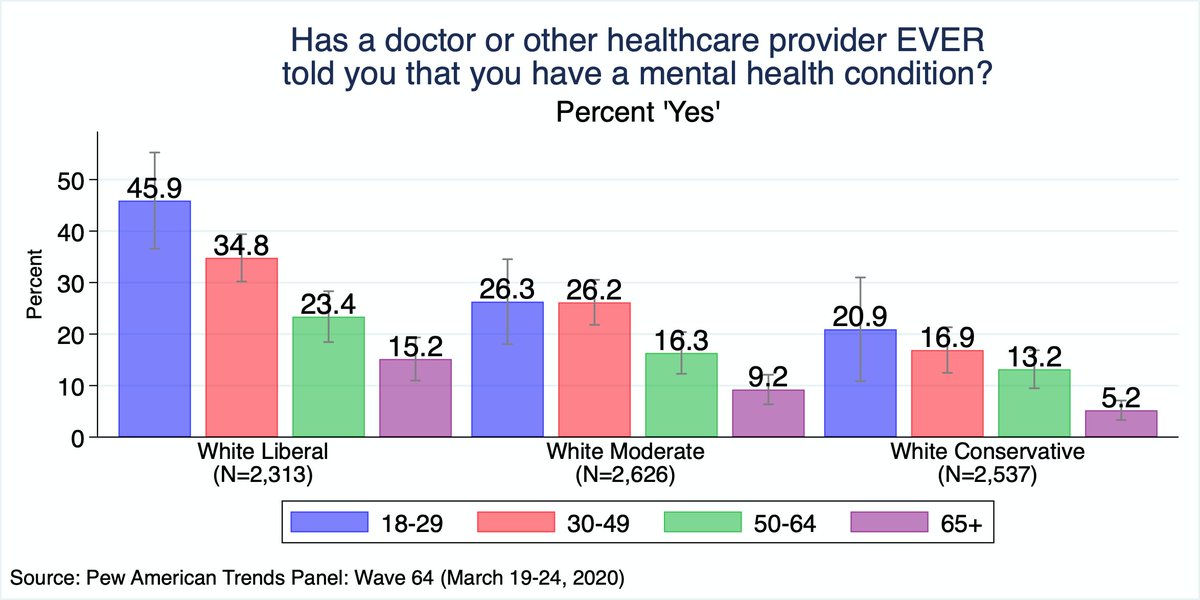 12/n @jean_twenge would like to get your thoughts on this. I know you've studied some of these trends.
13/n Big 5 personality profiles for white libs who report/don't report receiving a mental health condition diagnosis. 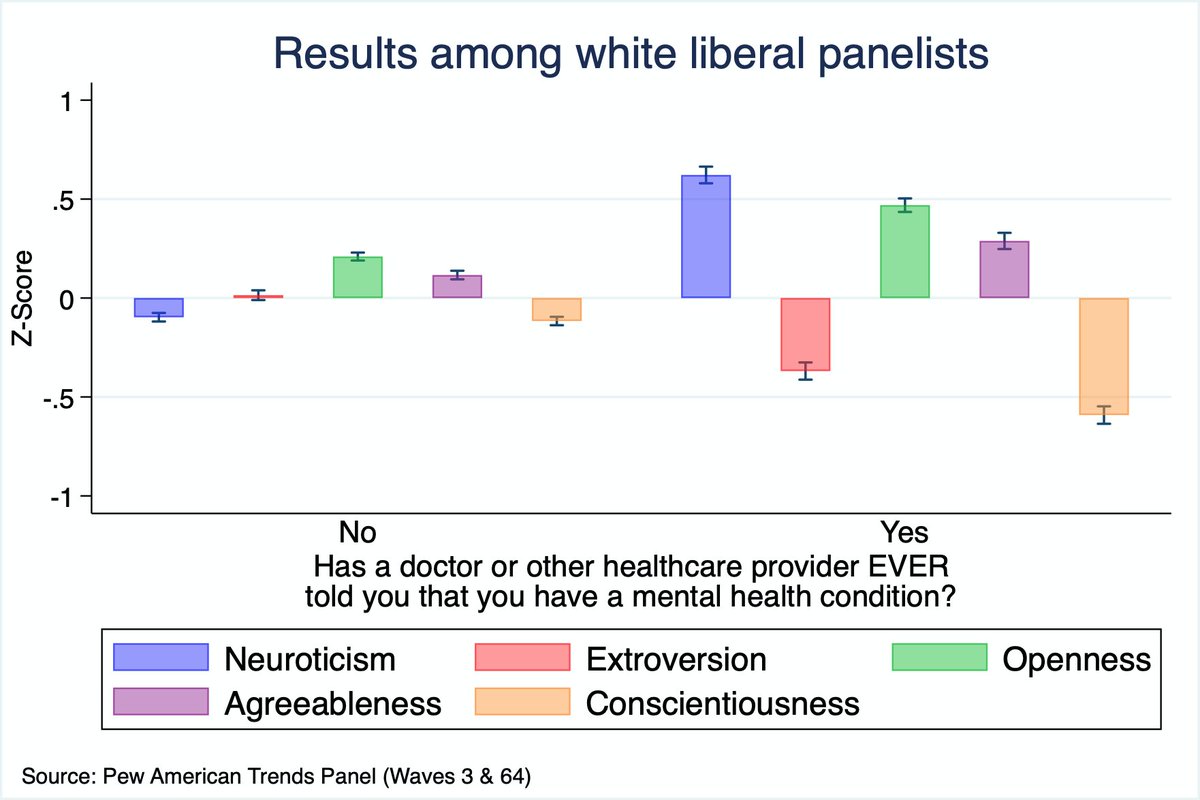 14/n One of the things that concern me about liberal social engineering and norm-promotion efforts is that they ostensibly cater to those who are emotionally fragile or those with specific personality profiles. Those with different personality profiles or have higher emotional..
15/n stability are just expected to shut up and deal with it.
16/n Some of you asked for it, so here is the last chart broken down by gender. Biggest gap within age x ideological groups is between white liberal men (33.6%) and women (56.3%) in the 18-29 category