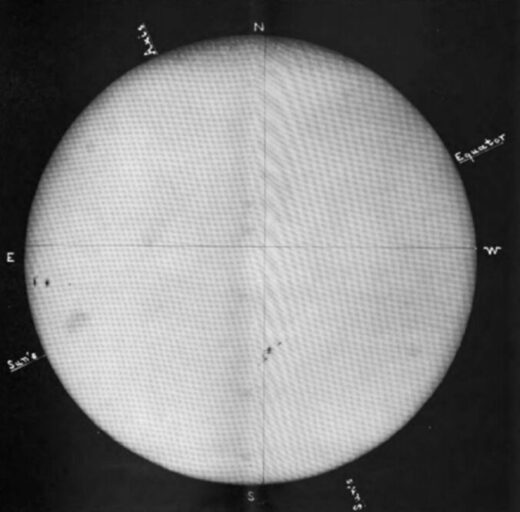 Above: A photo of the sun on Oct. 31, 1903, from the Royal Observatory in Greenwich. [ref]
Don't let Solar Minimum fool you. The sun can throw a major tantrum even during the quiet phase of the 11-year solar cycle. That's the conclusion of a new study published in the July 1st edition of the Astrophysical Journal Letters.

"In late October 1903, one of the strongest solar storms in modern history hit Earth," say the lead authors of the study, Hisashi Hayakawa (Osaka University, Japan) and Paulo Ribeiro (Coimbra University, Portugal). "The timing of the storm interestingly parallels where we are now-near Solar Minimum just after a weak solar cycle."

The 1903 event wasn't always recognized as a great storm. Hayakawa and colleagues took an interest in it because of what happened when the storm hit. In magnetic observatories around the world, pens scrabbling across paper chart recorders literally flew offscale, overwhelmed by the disturbance. That's the kind of thing superstorms do.

So, the researchers began to scour historical records for clues, and they found four magnetic observatories in Portugal, India, Mexico and China where the readings were whole. Using those data they calculated the size of the storm.

Above: The red line marks the 1903 solar superstorm in a plot of the 11-year solar cycle. [ref]
"It was big," says Hayakawa. "The 1903 storm ranks 6th in the list of known geomagnetic storms since 1850, just below the extreme storm of March 1989, which blacked out the province of Quebec."

In their paper, Hayakawa et al detail what happened. During the last week of October 1903, a moderately large new-cycle sunspot appeared. It was directly facing Earth on Oct. 30th when it unleashed a solar flare. The flare cannot be ranked using modern scales, because there were no Earth-orbiting satellites to measure its X-ray intensity. However, it must have been very strong; minutes after the explosion, Earth's magnetic field lurched (a "magnetic crochet") as radiation from the crackling sunspot caused strong electrical currents to flow in our planet's upper atmosphere.

The real action began 27 hours later when the CME (coronal mass ejection) arrived. A massive plasma cloud slammed into Earth's magnetic field-and pens flying off chart papers were the least of the effects. Surging ground currents disrupted communications around the world. In Chicago, voltages in telephone lines spiked to 675 volts-"enough to kill a man" according to headlines in the Chicago Sunday Tribune. Telegraph operators in London found they could not send clear messages to Latin America, France, Italy, Spain, Portugal, and Algeria.

Meanwhile, auroras spread across both hemispheres. Southern Lights were seen directly overhead in New South Wales, Australia, while Northern Lights descended past Colorado in the United States. "Shafts of cold gorgeous light [rose] almost to the zenith and gave the impression that a frightful conflagration was raging somewhere to the north of the city [of Leadville]," eyewitnesses reported in Colorado's Herald Democrat newspaper. 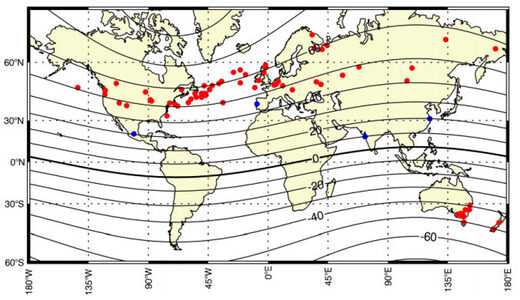 Above: Red dots mark aurora sightings during the Oct-Nov 1903 superstorm. [ref]
How big was it? Space weather researchers rank storms using "Dst" (disturbance storm time index), a measure of geomagnetic activity that can be estimated from old magnetogram chart recordings. For the 1903 storm. Hayakawa and colleagues found Dst = -531 nT. For comparison, the Carrington Event of 1859 and the Great Railroad Storm of May 1921 are both in the ballpark of Dst = -900 nT. Arguably, this puts 1903 within spitting distance of the greatest storms in recorded history.

As 2020 unfolds, the sun is experiencing, and perhaps just beginning to emerge from, a century-class Solar Minimum. Also, a new-cycle sunspot (AR2767) is directly facing Earth. Sound familiar?
Posted by Stock at 2:02 PM