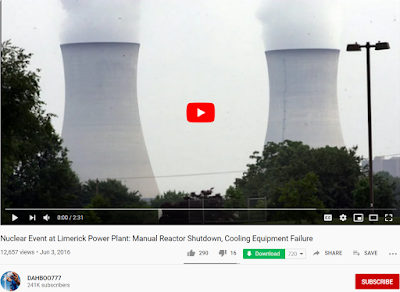 stock here: In typical complacency, the NRC has not made it illegal for people to fly drones over nuclear airspace.    In fact, the NRC even bumbles.....why even look for the operator, because we can't charge them with anything......


In May, I posited to "my clan" of around 80 people, to expect anything.   Including an attack on a spent fuel pool in USA.    You just need to punch a hole, OR destroy the water circulation equipment.

3 of these invasions of air space were strictly at Spent Fuel Pools, with no accompanying
nuclear plant present.

49 of them were completely unresolved.

Some of  these were noted to be "Industrial Sized Craft" 3 Feet Across.    Easily a craft this size could carry say 20 pounds of C4 explosive.

Following the September drone incident, Palo Verde was supposed to be protected by drone detection technology provided by ‘Area Armor’ (likely a typo for Aerial Armor) to pinpoint the drone operator within a 13-mile radius. The idea was that anyone flying a drone would be rapidly apprehended by site security personnel. This does not appear to have worked, and again the incident was closed as unresolved.

"They", the onsite security, allowed the drones to operate over their plants for "an hour".    Now just why the hell wouldn't they have shot down the drones in that hour?
https://www.newsmax.com/us/nuclearpowerplant-drones-nrc-fbi/2020/08/01/id/980105/

Guards at the plant described drones about two feet across flying 200-300 feet overhead at around 8:50 p.m. on Sept. 29. The aircraft loitered for more than an hour.
The next night, four drones flew over the plant at 8:51 p.m., this time without spotlights. Officials contacted the FBI, the FAA and the Department of Homeland Security about the incident.
NRC spokesman David McIntyre on Thursday said the organization wasn’t concerned about drones damaging or interfering with nuclear plants.
"The NRC believes there are currently no risk-significant vulnerabilities to nuclear power plants that could be exploited by adversarial use of commercial drones to result in radiological sabotage, or theft or diversion of special nuclear material," he said Thursday, according to AZ Central.