Compilation of Mayors, et al, In Dis-Functional Cities and Policies 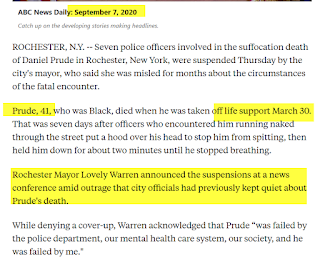 Rochester -- I'll Add To This List As Time Allows --- When did Daniel Prude Die???


Warren said the seven officers would still be paid because of contract rules and that she was taking the action (of suspending them) against the advice of attorneys.

How do you like Democrat Socialism so far?
What do these Mayors & Governors listed below have in common?
Tom Wolf (Gov PA), Jim Kenney (Mayor Philadelphia),
JB Pritzker (Gov Il), Lori Lightfoot (Mayor Chicago), Gavin 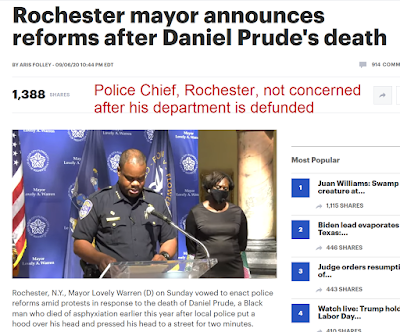 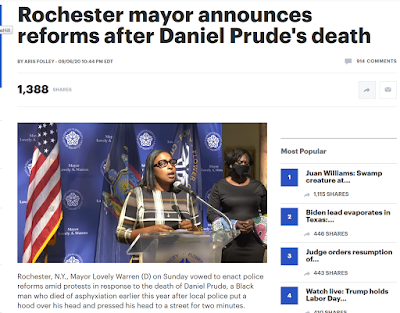 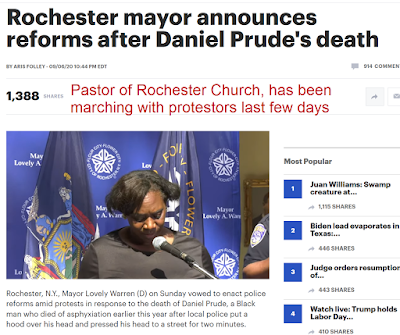 Newsom (Gov CA)
Kate Brown (Gov OR), Ted Wheeler (Mayor Portland OR),
Jay Inslee (Gov WA), Jenny Durkan (Mayor Seattle),
Andrew Cuomo (Gov NY), Bill Di Blasio, (Mayor NY)
Tim Walz (Gov MN) Jacob Frey (Mayor MN), Lyda Krewson (Mayor St. Louis),
Gretchen Whitmer (Gov MI), Mike Duggan (Mayor Detroit) , Keisha Bottoms (Mayor Atlanta GA)
All are Democrats, all kept their economy closed as long as they could (many still are) and all ordered police in their cities to stand down allowing the city to be looted, burned. citizens beat in the streets, killings, monuments destroyed, Oh, and all support Biden.
Antifa and BLM are the criminals behind this (the founder is a Marxist the media is trying to conceal this fact.) Now you know why the disrespect to the National Anthem, Flag. Democrat city and state leaders are complicit in this. A sneak preview of a Biden/Harris administration. (Notice Antifa violence is all but non-existent in Republican lead cities) If Joe Biden is elected President America will be on fire.....only Biden won't send federal officers to help. Biden/Harris will support the rioters.
Kamala stands with the "protesters" rioters. https://www.youtube.com/watch?v=aJ8xYyY69s4 I can SHOW you who Antifa supports. Go to antifa.com and it will take you to Biden/Harris Democrat Convention? All you heard was how horrible the American people are and how we must change.
They bash /blame President Trump constantly and that's about it for the convention. What you did NOT hear is anyone speaks of their platform? Seems odd, doesn't it? Their platform so bad they must talk about anything else.
Also not a word of the unrest in Democrat-controlled cities across the country. Remember, if you vote for Biden, you are voting for Kamala Harris for President. Biden is a shell of his former self.
If you vote for Joe Biden it will be for a far-left platform. Biden has stated many times in the past he is a "progressive." He will follow the radical left’s agenda or he won’t get the support (and he is) of
Nancy Pelosi, Bernie Sanders, Maxine Waters, Karen Bass (Leader Congressional Black Caucus), llhan Omar, Elizabeth Warren, Val Demings, Alexandria Ocasio-Cortez, Valerie Jarrett,. Rashida Talib, Stacy Abrams, Ayanna Pressley, Sheila Jackson Lee, Pramila Jayapal.
Listed on this page is the core of the socialist's / radical left-wing of the Democrat party and is firmly in charge. Biden will be a puppet to Kamala Harris and those mentioned above. BLM needs to realize they make up only 13% of the population and half of that doesn't pay taxes. They're not in a position to demand
Posted by Stock at 11:47 AM