Gates Polio Vaccine Now No. 1 Cause of Polio in World, 0.5M Kids Paralyzed By Bill Gates 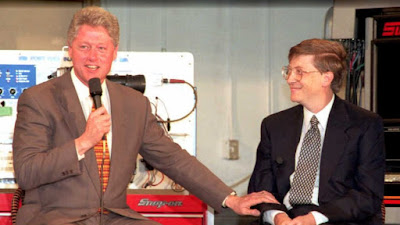 [#Vaccines, for #BillGates, are a strategic philanthropy that feed his many vaccine-related businesses (including #Microsoft’s ambition to control a global vac ID enterprise) and give him dictatorial control over global health policy—the spear tip of corporate neo-imperialism.

Gates’ obsession with vaccines seems fueled by a messianic conviction that he is ordained to save the world with technology and a god-like willingness to experiment with the lives of lesser humans.
The most frightening epidemics in Congo, the Philippines, and Afghanistan are all linked to Gates’ vaccines. By 2018, ¾ of global polio cases were from Gates’ vaccines.

Promising to eradicate Polio with $1.2 billion, Gates took control of India ‘s National Advisory Board (NAB) and mandated 50 polio vaccines (up from 5) to every child before age 5. I

ndian doctors blame the Gates campaign for a devastating vaccine-strain polio epidemic that paralyzed 496,000 children between 2000 and 2017.

In 2017, the Indian Government dialed back Gates’ vaccine regimen and evicted Gates and his cronies from the NAB. Polio paralysis rates dropped precipitously. In 2017, the World Health Organization reluctantly admitted that the global polio explosion is predominantly vaccine strain, meaning it is coming from Gates’ Vaccine Program.](https://fort-russ.com/2020/04/robert-f-kennedy-jr-exposes-bill-gates-vaccine-dictatorship-plan-cites-gates-twisted-messiah-complex/)
Posted by Stock at 12:43 PM