stock here -- Search the MSM, they are avoiding this subject "like the plaque", and why is that?

If you like this kind of research sign up as a follower using the right bar, it would be nice to think that at least 200 people want to read my research. 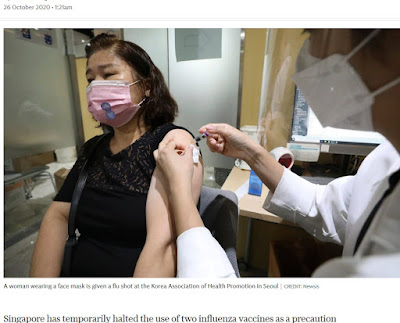 Keep in mind the 48 deaths are the reported numbers.   The real numbers can be 10 times higher....I mean is there a system in place to automatically track this?  No way, only when reasonably healthy people die unexpectedly, do their relatives make a stink and get someone to report it as a suspicious death.   Considering that they did autopsies on 20 people is also very telling.

This statement is rather damning, well the statement after it...which says they continue to investigate whether the deaths are related to the flu vaccine.

South Korea reported that, as of Saturday, 48 people had died after getting flu shots, but said it would carry on with the state-run vaccination programme because it found no direct link between the deaths and the shots.

The HSA is in touch with the South Korean authorities for further information as it investigates to determine whether the deaths are related to flu vaccinations.

Note the huge difference between this reality, and the claim of "finding no direct link".   Far different than saying "we have found that the two events are completely unrelated".   They just haven't found a conclusion yet, and so in an abundance of in-caution, they continue "the program".

I wonder if their vaccine manufacturers had any say in the matter.

The health authorities said they found no direct link between the deaths and the shots. They plan to carry on with the state-run vaccination programme to try to avoid having to fight both the flu and the coronavirus over the coming winter.

The Guardian (of the truth) reported on this days back when only 22 deaths were attributed to the vaccine.

However, they fail to notice and point out the absurdity of vaccinating 17 million teenagers, in their reported effort to avoid fighting CV19 Event and the Flu at the same time.

Teenagers are unaffected by CV19, and rarely require Intensive Care for the Flu

The most deaths in South Korea linked to previous seasonal flu vaccinations was six in 2005, the Yonhap news agency said. Officials have said comparisons to previous years are difficult, since more people are taking the vaccine this year.

Kim Myung-suk, 65, is among a growing number of South Koreans who decided to pay for a vaccine of their choice, despite being eligible for a free dose.

“Though just a few people died so far, the number is growing and that makes me uneasy,” she told Reuters in the capital, Seoul. “So I’m getting a shot somewhere else and will pay for it.”

CNBC briefly covered this, although they downplayed the severity of the mismanagement of properly storing the vaccine in refrigeration.    This is akin to leaving your milk on the countertop for a week and then being surprised it makes you sick.

The facts are that they stored the vaccine at room temperature, rather than refrigerated.    I call that negligent homicide.

CNBC peddles this alternate reality as

Last month, about 5 million doses had to be disposed of after not being stored at recommended temperatures.