Kyle Rittenhouse, No Charges in Illinois, OF COURSE. But The Cabal narrative continues

stock here: The videos are very self explanatory when viewed as a large group.   Self Defense.

The narrative to keep up the anger, the outrage, will be presented differently.   And those with no ability to change their opinions, will keep their opinions, and the lefties among them, will be wrong.

Lake country is NOT Chicago, but it is illinios.    If you are paying attention, note how the written narrative, needs lots of words, and note where it is slanted.    In particular, the second guy that was shot and killed....they pretend that he was "reaching to get Kyle's rifle" while distracting him with a skateboard to the shoulder.   In reality, there was no reach for the rifle, and a potentially deadly skateboard edge blow to the side of the head.    Big difference.

Plus Kyle had the rifle on a sling....no easy task to reach with one hand and "take it away".   So that narrative is telling.   Slanted in a huge way.

The Cabal wants to punish you for protecting yourself.   Duly noted.

Note the picture they use.    They ascribe the left picture to "Twitter" as if it is from his own Twitter page.   It is not.   It is one of the worst grainiest pictures making Kyle look bad.

Kind of reminds me of the Sandy Hook caricature boy. 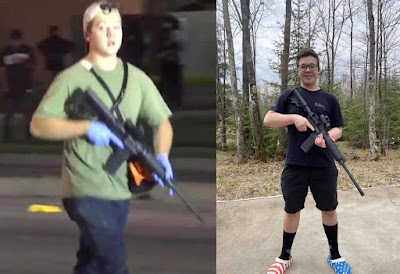 Lake County prosecutors said that the gun Kyle Rittenhouse used in the Kenosha shooting was bought, stored and used in Wisconsin. No charges will be filed against him in Lake County.

The Lake County State’s Attorney’s Office announced Tuesday that an extensive investigation was conducted by the Antioch Police Department.

The investigation revealed the gun used in the Kenosha shooting was purchased, stored and used in Wisconsin.

The Lake County State’s Attorney’s Office reviewed the investigation and determined no crimes were committed in Lake County.

Prosecutors said there is no evidence the gun was ever physically possessed by Rittenhouse in Illinois.

“I want to thank the Antioch Police Department for their diligence in investigating this matter,” Lake County State’s Attorney Michael Nerheim said.

Nerheim said that no additional details regarding the investigation will be released as to not disrupt the case in Wisconsin.

Rittenhouse, whose lawyers are fighting his extradition to Wisconsin, is due back in Lake County court on October 30 for an extradition hearing.

His lawyers have said that they are concerned for Rittenhouse’s safety if he were to be extradited to Wisconsin.

Rittenhouse is accused of shooting and killing Joseph Rosenbaum, 36, and Anthony Huber, 26, on August 25 near 63rd Street and Sheridan Road in Kenosha.

The following is a probable cause statement written by prosecutors based on information received from several police detectives with the Kenosha Police Department:

“On August 25th at approximately 11:45 pm a shooting occurred at Car Source which is located at the northwest corner of 63rd St. and Sheridan Road in the City and County of Kenosha, State of Wisconsin. The man who was shot at this location was identified as Joseph Rosenbaum. Rosenbaum was transported to a local hospital where a doctor declared him to be deceased on August 26, 2020 at 12:47 am.

In the course of investigating this incident, law enforcement reviewed and shared with your complainant [prosecutors] multiple videos that appeared to be recorded on cell phones. In the first video, a male who was later identified to be Kyle H. Rittenhouse, DOB: 01/03/03 (hereinafter “the defendant”), is running southwest across the eastern portion of the Car Source parking lot. The defendant is a resident of Antioch, IL.

The defendant then circles behind the black car and approaches Rosenbaum. Rosenbaum remains on the ground. McGinnis also approaches, removes his shirt, and attempts to render aid to Rosenbaum. The defendant appears to get on his cell phone and place a call.

Another male approaches, and the defendant turns and begins to run away from the scene. As the defendant is running away, he can be heard saying on the phone, “I just killed somebody.”

Detective Cepress interviewed McGinnis and indicates the following: Before the shooting, McGinnis was interviewing the defendant. The defendant told McGinnis that he was a trained medic. McGinnis stated that he (McGinnis) has handled many ARs and that the defendant was not handling the weapon very well.

McGinnis said that as they were walking south another armed male who appeared to be in his 30s joined them and said he was there to protect the defendant. McGinnis stated that before the defendant reached the parking lot and ran across it, the defendant had moved from the middle of Sheridan Road to the sidewalk and that is when McGinnis saw a male (Rosenbaum) initially try to engage the defendant.

McGinnis stated that they were moving towards the defendant. McGinnis said that according to what he saw the defendant was trying to evade these individuals.

McGinnis said when the first round went off, he thought it hit the pavement. McGinnis felt something on his leg and his first thought was wondering whether he had gotten shot. McGinnis was behind and slightly to the right of Rosenbaum, in the line of fire, when the defendant shot.

McGinnis demonstrated by extending both of his hands in a quick grabbing motion and did that as a visual on how Rosenbaum tried to reach for the defendant’s gun.

Your complainant [prosecutors] reviewed a fourth video that showed a different angle of the defendant running northbound. In this video a person can be heard yelling, “Get him! Get that dude!” Then a male in a light-colored top runs towards the defendant and appears to swing at the defendant with his right arm. This swing makes contact with the defendant, knocking his hat off.

As the defendant is on the ground, an unidentified male wearing a dark-colored top and light-colored pants jumps at and over the defendant. Based on the sounds of gunshots on the video and the positioning of the defendant’s gun, it appears that he fires two shots in quick succession at this person.

It appears that that person was not hit as he then runs away from the defendant. A second person who was later identified as Anthony Huber approaches the defendant who is still on the ground, on his back.

The defendant rolls towards his left side and as Huber appears to be trying to grab the gun the gun is pointed at Huber’s body. The defendant then fires one round which can be heard on the video. Huber staggers away, taking several steps, then collapses to the ground. Huber subsequently died from this gunshot wound.

After shooting Huber, the defendant moves to a seated position and points his gun at a third male, later identified as Gaige Grosskreutz, who had begun to approach the defendant.

The defendant turns around facing southbound while walking backwards northbound with his firearm in a ready position, pointed towards the people in the roadway.

Dr. Kelley also conducted an autopsy on Anthony Huber. Dr. Kelley indicated that Huber had a gunshot wound to his chest that perforated his heart, aorta, pulmonary artery, and right lung.