Remember Nov 1 2018, FBI's Wray Pretended The Fake Bombs Were Real Bombs? Why Wasn't He Fired Then?

stock here: The 2018 Fraud may have swung the house to the Democrats. It was obvious these were "fake bombs". 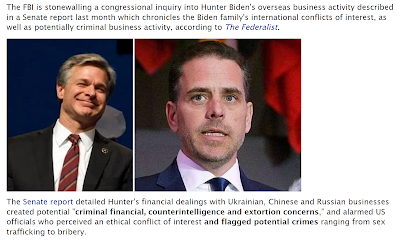 As former federal prosecutor Andrew McCarthy noted, if the mailed IED devices were “functionally explosive” they would fall under the category “weapons of mass destruction” [defined here by U.S. code] and the indictment would include 18 US Code 2332a [SEE HERE] The absence of this charge infers the devices were not functionally explosive. The pattern within the indictment in combination with the comments from the DOJ and FBI seems odd; and, in my humble opinion, rather political in nature from the perspective of FBI Director Christopher Wray (whom I think is extremely sketchy). In other words, Sayoc wasn’t charged with sending explosive devices for the simple reason that the fake pipe bombs did not contain explosives.

So what else is new? Isn’t it also interesting that Wray’s false claim fits right into the anti-Trump narrative of the dishonest lying media?