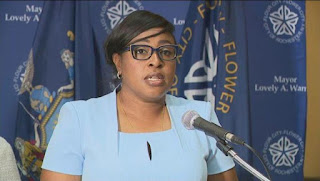 It should be noted that Rochester NY is also the home of the incredibly corrupt Ginna nuclear plant, that is no longer competitive, but they were able to scam a taxpayer "bailout".    Slime loves hanging together.

The Mayor and Police Chief "Recycled" a Death from Mar 30, in September in order to feed fire to their precious race war, story here:

ZH does still report real news, although they are cabal controlled.

The Mayor of Rochester, NY, Lovely Warren (D), was indicted on Friday on two felony charges, including a scheme to defraud in the first degree and violating election laws.

These sound like serious charges, and a lot more should happen than she just loses her job......

Warren has not been arrested, but will be processed according to Monroe County District Attorney Sandra Doorley. If convicted, the mayor would be removed from office.

"This could be a long process and we anticipate that there could be challenges along the way so I don’t think this will be anything resolved quickly," said Doorley in a press briefing.

Warren has called the investigation a “political witch hunt." Her lawyer did not return messages from Fox News seeking comment.

Specifics about the ongoing investigation were not revealed but the charges focused on Warren's first term in office from November 2013 through November 2017 in which she raised hundreds of thousands of dollars for her re-election, RochesterFirst.com reported.