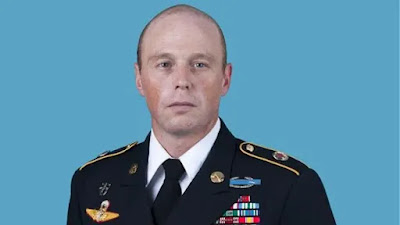 I couldn't let this one slide by.    My Spidey Sense was really tingling.    This ties directly into current events and it IS BEING COVERED UP.     The men were 37 and 44....but look at this picture....this is the 37YO Lavigne II, he looks like shit for that age.

The other dead man was Dumas was a "Property Control" specialist and was deployed to Afghanistan 4 times.   I wonder if the property he was controlling was related to the Poppies -- the real reason USA remains in Afghanistan......drug running.

A third person apparently shot both of them....but there is no mention of that.   It does not appear that they killed themselves simultaneously. 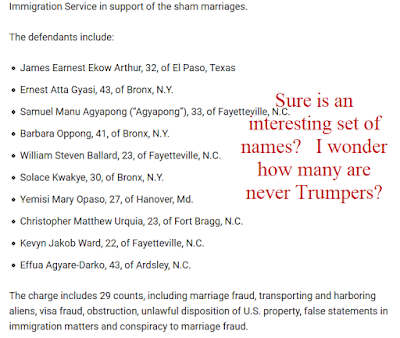 Fort Bragg Special Ops has been a hot bed of deaths and suicides and criminality.    One involves sham
marriages to bring Muslims in from Africa and "Marry" them to military.  Story here:

The two men may have been involved in criminal activity, a defense official familiar with the incident told The Washington Post, speaking on condition of anonymity to discuss the matter still under investigation.

Lavigne had been investigated in the 2018 death Sgt. 1st Class Mark Leshikar, 33, USASOC confirmed in an email. A member of the National Guard’s 19th Special Forces Group, Leshikar was fatally shot in Fayetteville on March 21 of that year.

Leshikar’s sister, Nicole Rick, told Connecting Vets on Friday that Lavigne and her brother were close friends, but had gotten into an altercation that night. Lavigne locked Leshikar out of the house, but his young daughter unlocked the door. When Leshikar came into the home, he and Lavigne had a confrontation that ended with the shooting. Lavigne told Rick that her brother had a screwdriver, she said, but she claimed nothing was found at the scene and “no real investigation was ever held.”

The article continues with further deception.   They were found dead inside one or both of the mens houses.    But since this is on base, the military would not house different families in the same dwelling, they just don't do that.     So the deception is that the publishers makes the statement that they were found dead in a training zone.    Not a house.    See how that spin works?   But why?

And they are mixing the current story with a prior killing by Lavigne in 2018 on the Spring Equinox.