Jupiter and Saturn’s Great Conjunction -- And Eruption Of Moana Loa 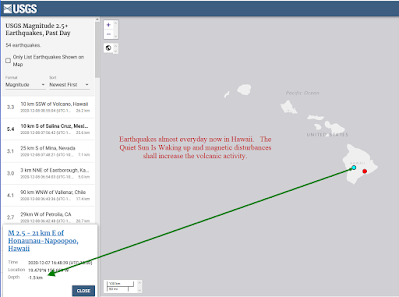 Usually it’s the Astrology types that talk about conjunctions (being close or in line) of planets.   There
was a massive conjunction this summer solstice of planets all lined up on one side of the sun.    Jupiter takes eleven earth years for a trip around the sun, coincidental with the half magnetic cycle / sun spot cycle of the sun, 11 years, the full magnetic flip is 22 years. 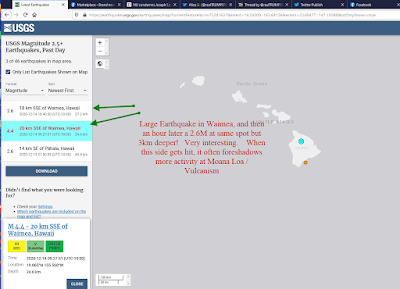 How to See It

I will be rewriting earth geo-mechanics later next year, at which time I shall expose the 22 year volcanic cycle, and the interactions the interplanetary magnetic fields, galactic cosmic rays, and “nucleation” of volcanic gases in magma all influenced by the sun and space weather.    We are definitely in an earth based magnetic excursion (aka possible magnetic pole flip) and maybe headed to a “Grand solar minimum” (aka a dearth of sunspots).     One startling finding from my observations during the 2018 HVE Hawaiian volcanic event, was that during period of very low sunspot activity…..you get increased clouds (via cloud nucleation via GCRs) which create cooling effect, and you get increased vulcanism, via the same GCRs Galactic Cosmic rays and other magnetic field (aka magnetic shield) effects.

About 2 weeks ago, I predicted an eruption of Moana Loa or Kilauea or both in the next month, it’s possible this conjunction, and the combined interplanetary magnetic fields and flux transfer, could be the trigger, and solstices and equinoxes of the Earth are particularly prone to large volcanic and earthquake events.   So stay frosty, and any night in the next week would be great viewing of this historic conjunction if you can find some dark skies and tip a frosty one too!