First Prediction of The Robinette Era: Fox News Will Return to Being Controlled Opposition

Zero Hedge Will Also Return to it's "Former Glory"

And people will think that they "have a voice"

And the face and smile that sunk a thousand ships 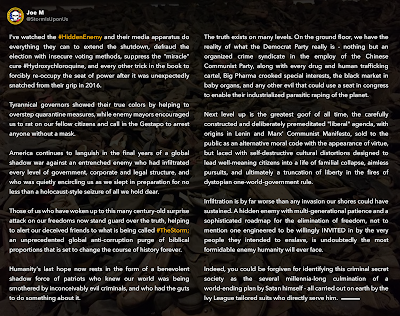 We have that satanic pedophile piece of shit waste of skin as president as a direct result of president Trump! He picked those he would listen to. He picked Bill Barr, he picked ACB and Kavenaugh! He gave us the lucifer vaccine and allowed DC to become a military occupied police state never seen in our history! We got played fucking bigtime friends and Patriots...played bigtime! The one promise Trump made above and beyond all others was to drain the fucking swamp!

But what did he leave us as he goes riding into the sunset? The swamp effectively controls every nook and cranny of our pathetic excuse for a government! It cracks me up when people say we can give it another go in 2022 and 2024!

Really? Are you really that fucking stupid? The demorats just succeeded in stealing the biggest damn election in US history...they did it right out in the open, in every way possible and with total immunity!

What in the world would make you even hope of every subsequent election we have to not be rigged. In fact, every election of any consequence has been rigged by these asswipes for the last 40 years most likely!

I knew Trump was lining his cabinet with deep state swamp rats from the beginning. If I knew that, you mean to tell me Trump didn't? That's ludicrous! I really did support Trump, but now that it's over...and America is gone...I wish we would have elected a moderate globalist like Mittens or that faggot what's his name?

At least then the libtards and CCP wouldn't have put us through the last 4 years of friggen hell on earth and maybe we would still have enough of our country left to salvage! We might have at least had more control at this point.

Hell, we might have gotten another 4 years of moderate calm and maybe not had to deal with this COVID hoax bullshit! I was looking forward to being a grandfather...well...I'm not so sure I want that to happen now! Thank you very much Trump! You can have your extra tax pittance back, you can have your super-fast vaccine back and you can have your MAGA back!