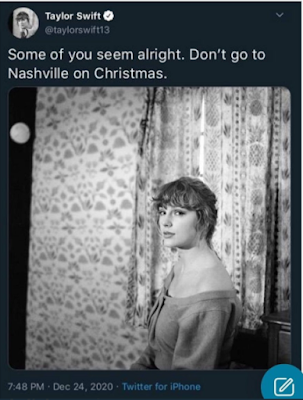 Our Box of Curios from Nashville

We have covered the weird AT&T building being bombed by a musical camper-van in Nashville over a week ago.

This post is for the oddities getting discovered about that story.

And more mcmmadness, my browser malware warned of a trojan.....just saying

Dominion Voting is owned by Cerberus. Cerberus is run by Staple Street Execs.

Cerberus and Carlyle need no intro here, the latter tentacles digging as deep as it gets into the 9/11 programming.

Remember who benefited from the Flight MH370 disappearance? Freescale Semiconductor got the patent as a result of the 4 Chinese execs dying. Freescale is owned by Cerberus.

This is going international. Buckle up.

Carlyle’s previous heavyweight clients include the Saudi Binladin Group, the construction firm owned by the family of Osama bin Laden.

Four days after Flight MH370 disappeared, the semiconductor patent was approved by the U.S. patent office patent is divided in parts of 20% between five starters. One of the owners is the company itself, Freescale Semiconductor, Austin, Texas (USA), and the other four Chinese employees of the company: Peidong Wang, Zhijun Chen, Cheng and Li Ying Zhijong, all the Suzhou City. And they were all passengers on the Malaysia Airlines plane that disappeared on March 8, 2014 – and whose ultimate whereabouts, by the way, are still unknown.

Meet the new BCCI on steroids.

He recused himself because he owned 1.2mil shares in ATT. He was just fired by Trump. Coincidentally. he was on the board for Time Warner which ATT bought.

Vice President Quayle is Chairman of Cerberus Global Investments and a member of the Firm’s senior leadership team.

Prior to joining Cerberus in 1999, he served as the Vice President of the United States of America to President George H. W. Bush from 1989 through 1993.

At the time of the downing of the Malaysian plane, I read that it was Rothschild, not Freescale, which stood to inherent absolute control of the highly prized Freescale patent that would change everything. Perhaps Rothschild was/is controlling partner of Freescale, while Carlyle is a junior partner; both having unknowable victims in their wake.

It is also worth mentioning that Bush Sr, nefarious former Director of the CIA, Carlyle investor, rumored ally in the Dulles- CIA and Mob hit / assassination of JFK, and sponsor of failed attempted assassination of President Reagan, while Bush Sr. was VP during Reagan’s 8-years in office, and also sponsor and puppet master of Bill Clinton, husband of wicked Hillary, who stood to gain unknowable and near unlimited power and fortune from the U.S. president ascendency; if only Trump hadn’t gotten in her way, and ultimate sponsor of Ford Foundation (mother worked there) and Bill Clinton tutelage, the preeminent Manchurian Candidate Barrack Hussein Obama, the key facilitator of the seamless transition of presidential power from Obama to Hillary, the long awaited female president.

- The attack did not go unnoticed.

- The attack was successful, as intended.

- AT&T building has been used for communication.

- AT&T has stored some records regarding emergency or crisis management.

- Attacking AT&T was a test.

US intelligence has indicated that the attack was not directed just at the USA but also targeted at international communications.

Assets have already been mobilized.

Local authorities are formulating plans and some are at work already.

Heavy assets are on standby.

The terrorist attack on AT&T building was a test. If the test was successful, the enemy wants to cause an escalation of the crisis.

AT&T got a contract to do forensic audit on Dominion voting machines and those machines were being moved to Nashville.

The former owner of the ATT building in Nashville was Cerberus Capital Management.  https://en.wikipedia.org/wiki/Cerberus_Capital_Management

After completion in 1994, the AT&T Building was purchased by Prefco XIV L.P., a limited partnership of the Pitney Bowes Real Estate Financing Corp, for US$100.8 million. Ownership of the building was transferred to Cerberus Capital Management subsidiary EntreCap Financial in July 2006 after Cerberus acquired Prefco. The building was immediately placed back on the market for resell, and in mid-2007 was sold to MTL Leasing LLC for an undisclosed sum.

Dominion voting is owned by Cerberus. Cerberus is run by Staple Street Execs.

Staple Street owns Dominion and is a relatively small private equity company, who has not raised capital or had substantial new investors since 2014/2015 of about $200 million. But now after a rushed Delaware Corp., filing October 5, 2020, Staple notified U.S. SEC 10/08/20 they’re expecting $800 million minimum. Yet Staple Street’s website is suddenly shut down, except for the base page.

According to the report, Georgia has eight registered lobbyists for Dominion, including Lewis Abit Massey, a former Democratic Georgia Secretary of State, and Jared Thomas, former chief of staff for Republican Governor Brian Kemp.

In July of 2019, Li Qiangmin, Consul General of the People’s Republic of China, met with Kemp in Atlanta to discuss trade and tourism issues, according to U.S. China News.

On behalf of the state government, Governor Brian Kemp thanked Consul General Li Qiangmin for his contribution to the development of Trade and Tourism between China and Georgia over the past five years. Consul General Li stressed the importance of the development of friendly relations between China and the United States and welcomed Governor Brian Kemp’s early visit to China.

The Nashville bomb blast took out the Sunguard generators and they are 200 Commerce Street. Silver Lake, owner of Sunguard, recently bought SolarWinds:  https://cloudandcolocation.com/datacenters/sungard-nashville-data-center/

I’m still going thru and collating all of this above data that I’m laying on you here to get a firm fix on WHAT exactly happened in Nashville – at this point there are pros and cons for both white and black hat involvement, but this late posting by none other than Lin Wood argues for this being a white hat op: there were numerous reports of gunfire before the bombing which is inconsistent with being the work of a lone bomber, and might reasonable indicate that the white hats killed the bomber before he was able to position the bomb appropriately, which is why he/they failed to destroy the evidence they were trying for.

There is also ample evidence that the majority of the destruction took place underground, which would for my money indicate that this was a white hat operation aimed at taking out some black comms, while still securing evidence. At this point there is just no way to know one way or another with 100% certainty. Google maps is still obfuscating the exact building address as shown above…

What IS able to be ascertained, and quite easily, is the terrain in which this attack took place, and the markers are all there.

Nashville is home to the Pinson Mounds, https://en.wikipedia.org/wiki/Pinson_Mounds

A Native American (or earlier) series of geometric enclosures dotting the landscape and dating back to somewhere around 1000 BC-1000 AD in the Woodland Period of North American prehistory. The functions of all were believed to be ceremonial. It’s believed they also served as burial chambers.

The largest and tallest is numbered Mound 9 and called Saul’s Mound, standing 72 feet high, making it the 2nd highest ceremonial prehistoric structure in the US.

The Saul’s mound’s 4 corners are precisely aligned with the 4 cardinal directions. 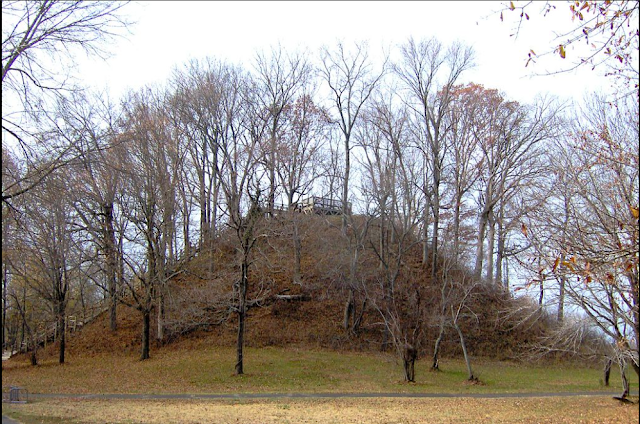 Where have those coordinate features come up before? And why?

We are dealing with traditions, with rites, that travel far back in time and still leave their imprint on the present day. As we have noticed and examined before, these could be very well sketched out rituals that serve as a method of summoning – Nashville being just one of their hubs and/or comms nodes in the network. By which I mean communications between themselves and earthly coordinates, as well as comms between this sphere and parts unknown…

Leave something witchy. And speaking of witchy, look who called out Nashville before it happened (hey, witches just know...) 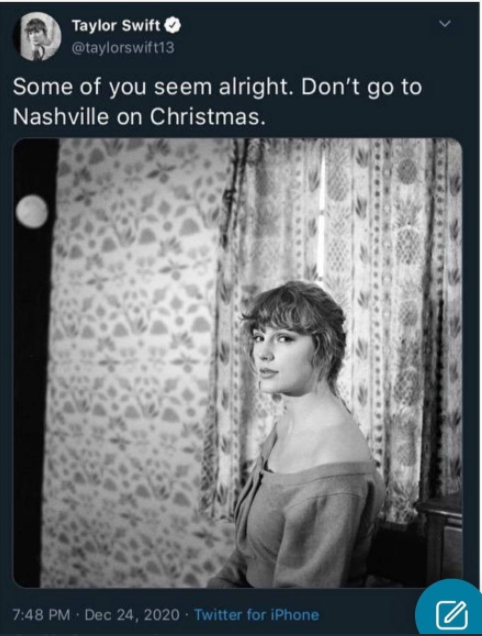 Miss Taylor has been leaving her own personal cloven pawprints in lots of places lately: https://www.youtube.com/watch?v=KABSYzPqTTg

Cute, but down to brass tacks, signaling is signaling. And they’re not shy about it anymore.

Is this the same “Coven” that Hillary calls home? Because we know the way HRC rolls, & if TSwift is down with that mess, well, it might explain a lot of other circles with info she might be privy to…

And speaking of not shy, here’s the original Mr. Not Shy, Lin Wood, who seems determined to see out 2020 in a historic blaze of bombing runs: 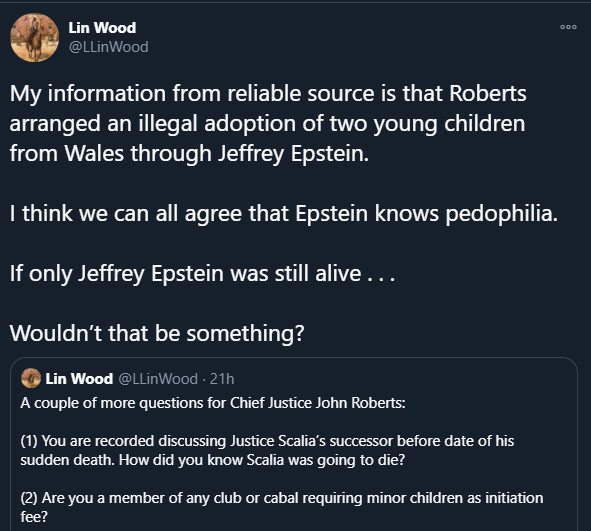 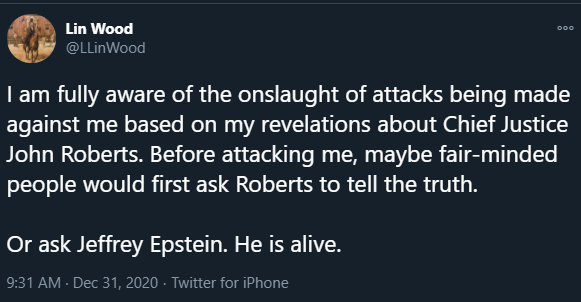 Yes, my friends, forces are aligning at a rapid pace in the race til January 6th, when all of this might come to a head. Why exactly would a Tier-1 attorney, helping represent the President’s case for widespread voter fraud and himself an expert in both slander and defamation litigation, say such things about a sitting Chief Justice of the US Supreme Court?

Would he do so without ample evidence to back him up?

Is this a message? A threat? A promise for ultimate justice?

Just WHAT is going on here?

As has been noted before, it makes for the largest and widest scale true-to-life James Bond film in living memory. And we’re all playing pivotal roles as 2020 careens to a close. To say these times are exciting would be an understatement. Just by reviewing all of the above against what’s been unveiled in the headlines regarding the number of outages, info-disappearing actions, offensive strikes and internet downings in recent days, it is quite apparent that a historic scale of information-processing and changeover is occurring, a mad scramble to either burn it all on one side, or save as much as is possible on the other for prosecutorial purposes. We are quite literally in the middle of a raging INFOwar taking place – Information itself is the new gold standard and the lever by which a new world order will be either forged or disassembled.

The junction we’re inhabiting now will determine the course of the world. The next 3 weeks could very well determine the next 3 decades, if not far longer. The time for frantic panicking and coolly pulling the trigger is here – so what’s it gonna be? Do ya feel lucky, punk?

I’ll have much more to say soon (working on something else even as I’m finishing this) – but as for now, adios 2020, it’s been nice knowin’ ya. But you did teach me one, all-important, lovely note of grace and beauty: you may forget who you laugh with, but who you cry with you’ll remember forever. And you know who you are…

And as for you lot, I’ll see you next year. When we get to do it allllll over again. Catch all you cats and kittens on the flip side!! 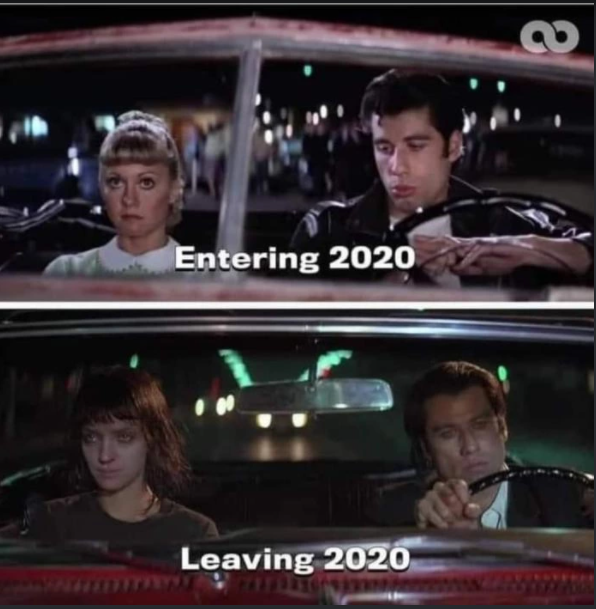