This is the propaganda of real Fascists:

Hat tip to FC, doing exceptional reporting in this age of censorship 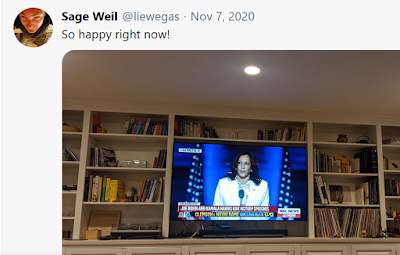 This is one of the owners of the web service that hosts this propaganda.   He brags about how the absentee ballot from Wisconsin arrived today.   He lives in Los Angeles.

This is the propaganda of real Fascists:

We have a Nazi problem in this country.  Some 73 million people voted for it. Their leader is still in power and waging a battle to delegitimize the election he clearly lost. His followers maraud through the streets and raise $2 million for a teenage killer’s bail and destroy Black Lives Matter murals and chant “Say his name, Donald Trump,” spitting on the anguished cries of Black people whose lives are so routinely cut down by police.

They don’t, for the most part, wave swastikas and salute Hitler, but we have a Nazi problem in this country as deeply as the German people had a Nazi problem in the 1930s. Their minds waterlogged with conspiracy theories, they take lies as truth, spread hate and bigotry, wrap themselves in several flags – American, Confederate, Blue Lives Matter – and use the Bible as a weapon of violence and repression. They are a grotesque expression of the worst of this country, of its ugly narcissism, its thuggish militarism, its ignorance and refusal to give a shit about the rest of the world. They carry the torch of slavery, genocide, and Jim Crow terror. Gunned up and mask-less, they exalt above all the right to kill.