Laughable, The Contention That Jan 6 Was Either an Insurrection or a Coup -- The Lefties Love That Meme -- Want To Preosecute Patriots At Traitors 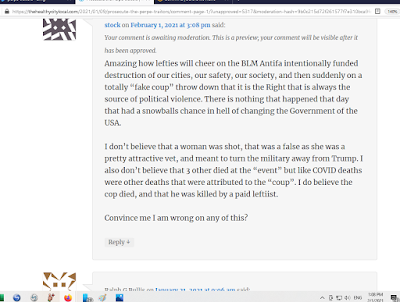 I coined the words Perpe-TRAITORS and then did a web search for the phrase, some minds think
alike....

Amazing how lefties will cheer on the BLM Antifa intentionally funded destruction of our cities, our safety, our society, and then suddenly on a totally “fake coup” throw down that it is the Right that is always the source of political violence. There is nothing that happened that day that had a snowballs chance in hell of changing the Government of the USA.

I don’t believe that a woman was shot, that was a false as she was a pretty attractive vet, and meant to turn the military away from Trump. I also don’t believe that 3 other died at the “event” but like COVID deaths were other deaths that were attributed to the “coup”. I do believe the cop died, and that he was killed by a paid leftiist.

Convince me I am wrong on any of this?

We must prosecute ever malfeasance and instance of corruption committed by Trump and his minions, or they will rightly decide they can get away with anything. We have to have it out in the open so that, among other things, we can prevent his returning to power and prove (insofar as they will accept it) to his followers exactly why he is unworthy of their support. And incidentally throw his corrupt appointments out of office and his corrupt regulations off the books.