Over 12,000 Americans Already Killed By the COVID Vaccine

For some people, it may be all they need to know about the vaccine...that it did not go through a normal testing cycle, that it is a mRNA type of vaccine, which aims to enter your cells and change your DNA, and replicate within yourself to be able to spread to all cells and modify all DNA.

That a likely outcome, which may not be seen for 12 to 16 months is an overacting auto-immune response, and perhaps a Cytokine Storm, which is not just an over blown response, but one that not just keeps going, but it also keeps growing. 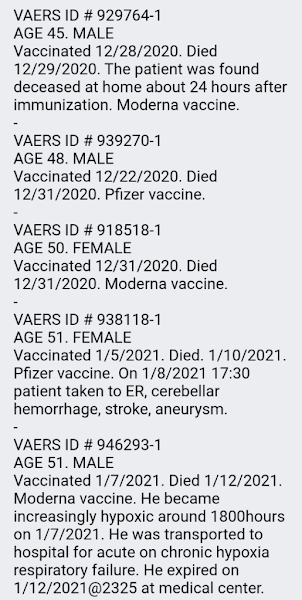 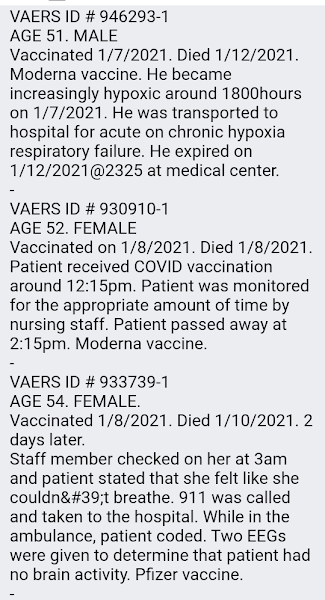 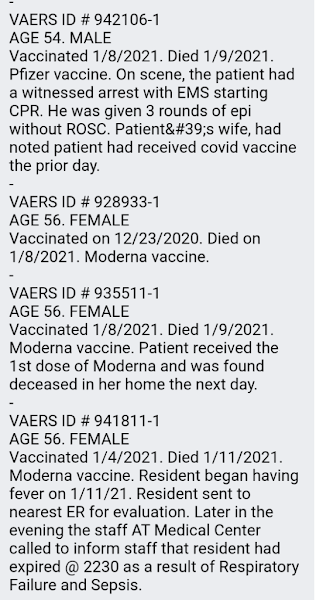 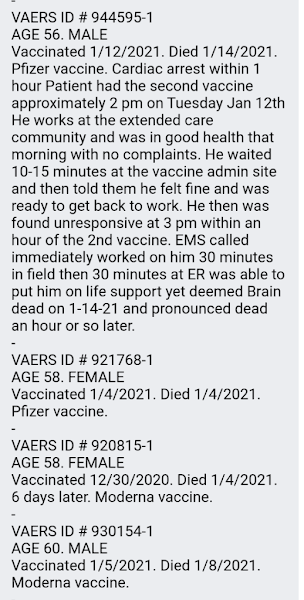 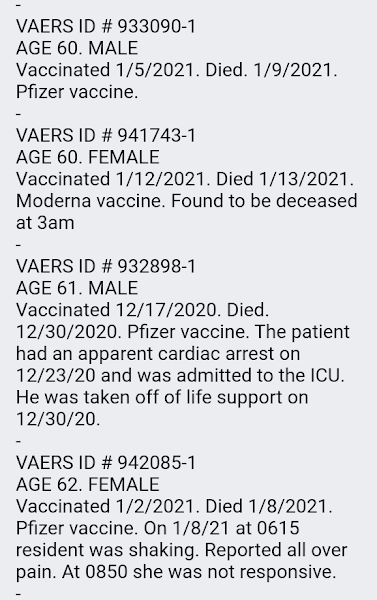 The VAERS system is the Vaccine Adverse Effects Reporting System in the USA.

Let cut to the conclusion first, and then spend some time discussing it.

VAERS Currently reports 600 Deaths in USA linked directly to one of the many experimental COVID.   If only 5% get reported to VAERS, that means 12,000 deaths have occurred.

There is some percent of Adverse Events (Can't Go to work, Shaking, Paralysis, Death) that do not get reported to VAERS.   What percent is disputed and not clear, in fact it is impossible to tell.

Many will assume that I am a Trump loving anti-vaxxer and nothing is further from the truth.  Trump leaving the game plan to only now consist of a Military action AFTER the Manchurian candidate has been installed, is not a great strategy.    And of course I understand the "immune response" cause and effect.

I used to hit McDonalds about once a month, so my body knew how to respond to poison, but I reduce that to 3 or 4 months for my "second dose".

In terms of VAERS, I had a quite serious Adverse Reaction from a vaccine.   Last year 2020 with perfect vision I took my first and second Shingles vaccine.   After the first one I had bad pain and stiffness in the arm that received the shot.    2 months later, after the second shot, it hurt, but the next morning I woke up 90% dysfunctional.   I could move around, but could not think, could not perform complex mechanical work, but could surf the web and sleep...I did nothing else the whole day, I was shot, it was worse than a terrible hangover after a three day college drinking festival. 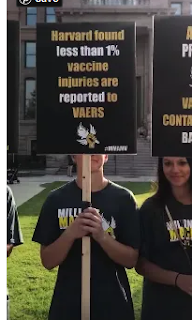 I did not report this my doctor, nor to VAERS.    ITS AN EXAMPLE

Some health care professionals in the vaccine field think that only around 5% of  Adverse Events get reported to VAERS.  Now look at the "Straw Man" argument that Vaxopedia throws out that "someone" is stating that only 1% get reported.    All those .....Pedias are Cabal controlled bullshit.

Also note that Vaxopedia does not try to establish a percent that they believe in.

However in this survey published in PubMed....only 71% of Health Care Providers.

Obviously, the 29% who were not aware of VAERS did not report ANY of the adverse events that they experienced.

Here is where you can report to VAERS -- Anyone.  They also encourage HCPs to report if they made any errors in vaccination!   LOL ya right sure.

Which brings up a point....what type of events are least likely to be reported?   I posit that deaths are very unlikely to be reported.     HCPs would not want to cast doubt on "their precious tool" vaccines, nor would they like the just shed light on their facility, like what if they had made a mistake?

“It’s not that reliable of a system,” said retired RN, Loralyn Dennis, who has over 15 years of vaccine experience. “Healthcare providers are hesitant to report to VAERS because it could place them in bad light with Big Pharma. Many times parents or patients will call their providers to report problems and expect them to turn it in to VAERS. Most reliable sources indicate all that is sent in is maybe 5% of the total.”

might justify the non-report as "he was co-morbid, he was old and going to die anyway...."

But looky at the images at the beginning....many of these deaths are from people in their 40's and 50's.  These are actual VAERS COVID Deaths

I have made my decision, there is just far too much bullshit flying around, and the whole COVID narrative out of the gate reeks of nefarious.   The COVID story hit hard with around 8 significant developments on 3-11-20 and 3-13-20 (Note the first one is also Fukushima day, of which 10th anniversary is barreling down on us, and still they have not found any corium)  Something very evil about that day.    But by 3-20-20 I was writing a COVID article describing "something is rotten in Denmark".