Cabal News Trying The Crush News "COVID Jab Is Not a Vaccine", It Is Gene Therapy. Proof from NIH = Gene Therapy 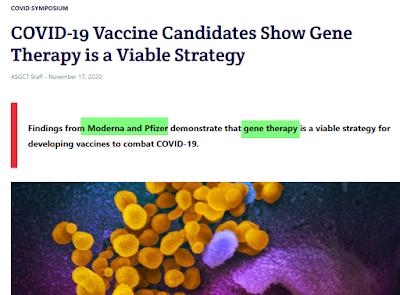 The powers that be had no idea that people would revolt against getting "Gene
Therapy".  In Nov 2020, Moderna and Pfizer was proud to pimp out their new Gene Therapy tools, see image, and LINK
Now the Cabal tools are trying to "debunk" those calling it a Gene Therapy.    Look back to when they misunderstood the public intelligence AND when they didn't really have a horse in the race, YET.
Cabal: U of California, Irvine (Liberal idiots)
https://www.newswise.com/factcheck/covid-vaccines-aren-t-gene-therapy

And Here "Fact Check" is one of the most horrific abusers of truth....Cabal fodder:

Synthetic messenger RNA as a tool for gene therapy

Transfection of human cells with DNA in biomedical applications carries the risk of insertional mutagenesis. Transfection with mRNA avoids this problem; however, in vitro production of mRNA, based on preliminary DNA template cloning in special vectors, is a laborious and time-consuming procedure. We report an efficient vectorfree method of mRNA production from polymerase chain reaction-generated DNA templates. For all cell types tested mRNA was transfected more readily than DNA, and its expression was highly uniform in cell populations. Even cell types relatively resistant to transfection with DNA could express transfected mRNA well. The level of mRNA expression could be controlled over a wide range by changing the amount of input RNA. Cells could be efficiently and simultaneously loaded with several different transcripts. To test a potential clinical application of this method, we transfected human T lymphocytes with mRNA encoding a chimeric immune receptor directed against CD19, a surface antigen widely expressed in leukemia and lymphoma. The transfected mRNA conferred powerful cytotoxicity to T cells against CD19+ targets from the same donor. These results demonstrate that this method can be applied to generate autologous T lymphocytes directed toward malignant cells.