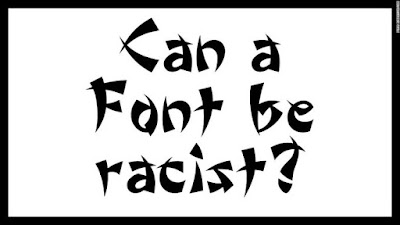 stock here: I rarely read full text of long articles, or at least speed read them for
content gathering.    But this one is worth reading if you are not up to speed on the one world government process, controlled by those with nefarious purposes.

I hope it formats OK....maybe best to just view it at it's source and bookmark that website.

Many people have been asking when the media will take a stand against racist fonts.

Well, after all this time, CNN has stepped up to the plate and is taking on anti-Asian racism in fonts.

While white supremacists are trying to distract you with things like:

And other such unimportant nonsense, CNN is hitting the hard issues – like racist fonts.

The whole anti-Asian thing is getting totally out of control.

Asian people (even if raised in the West, frankly) have a sort of genetic autism and can’t understand what this “hidden secret implied racial stereotype bias” stuff even means. Honestly, I don’t think anyone other than white people understand what it means. (I have come to the conclusion that black people do not understand it, and simply have come to understand the specific triggers that can give them power over white people.)

I know as an absolute matter of fact that the Dr. Seuss images that are called “anti-Asian racism” would be liked by the Chinese.

They would probably make stickers out of that image, if they knew about it.

The same is true for the Chinese cat in the Disney film The Aristocats. That film was pulled from Disney’s streaming service because of the Chinese cat.

A Chinese person would see that and say “oh, it’s a China cat.” I don’t know if they would think it was funny, but they would probably feel appreciated that you thought about them and put them in your movie.

The Siamese cats were of course removed from Lady and the Tramp in the remake.

Chinese might actually not like that, but the reason wouldn’t be because of a “stereotype,” but because it shows Asians as the bad guys. The second Christopher Nolan Batman film wasn’t shown in China because it had a Chinese gangster in it.

“You no say bad China people” is a general sentiment, although that is mainly in relation to their domestic policy of not ever showing Chinese people in a negative light. In terms of people in other countries saying mean things about them – honestly, I don’t think they care at all either way what any non-Chinese person thinks about them. In my experience, they are more or less oblivious to it.

This is true both ways – they don’t seem to be interested in promoting positive sentiments towards their country anywhere outside of China. I give the example of the recent Chinese soulslike game Xuan-Yuan VII. A friend bought it for me, and I found it was a pretty decent game. I don’t generally play action games as a rule (I have never owned a console, but I do own a controller for rare occasions and side-scrollers), though I do sometimes enjoy the soulslike format.

I can’t play Dark Souls because it is just too dark and depressing. But this China game was a much lighter tone. It is based in ancient China and has themes of Chinese myth and history. You play as some kind of Kung Fu swordsman fighting demon monsters from Chinese mythology. It’s got a lot of the standard Chinese gooey sad type stuff, with a story of a boy’s family being killed and him growing up to take revenge.

This is a AAA game. It’s technically very well done. (It’s not game of the year, and I am not recommending it as some top hit, but it is plainly serviceable.)

But here’s the thing: they didn’t even bother to hire voice actors to do an English version of the game. It has subtitles, which barely make sense most of the time. They have clearly lost a good amount of money by not doing a translation, for one. For two: a good Chinese video game, that also portrays Chinese culture in a positive light, would create goodwill in the West. It’s a very simple thing: no one hates the Japanese, primarily because of Japanese culture being so prevalent in the West.

We had a war with Japan in the 1940s, but if you tried that now, people would say: “why do you want to kill Pikachu?”

Point being: as a general matter, Chinese are totally oblivious to the fact that anything outside of China actually exists. They are completely confused by the aggression of the West towards them.

This weird stuff with cartoons and fonts they just wouldn’t be able to grasp, at all. Anyone who knows anything about China, or just Asians in general, is aware of this fact.

Yes, I’m sure they can find some whitewashed Chinese women raised in America who will promote their hate hoaxes, but that is the extent of it. This CNN article interviews two different Chinese people who work in American academia who said they don’t think the fonts are racist, and must have been confused by the call from CNN.

People say that Google Translate doesn’t work on Chinese, because the translations don’t make any sense. Actually, the translation works perfectly, and it is simply that Chinese people use language in a way that is more or less incomprehensible to Westerners.

This massive cultural gap is being exploited by the US State Department and the CIA to attempt to stir up a conflict. All of this anti-Asian hate stuff is designed as a cover for escalating tensions with China, something which does not benefit Americans in any way, and makes no basic sense.

However: it is natural for people to be suspicious of the Chinese, simply because they are so different. I am pretty much the only person on the internet, left or right, speaking out against this push for war with the Chinese, and I’ve really been trying to understand why it is so widely supported. What I have concluded is that the Chinese are so much different than whites that it is very easy to sell white people on the idea that they are a threat or a menace of some kind.

It’s basically the Iraq War all over again, where you have aggressive, hateful Jews manipulating white people’s psychology to get them to engage in a conflict that only benefits Jews.

The anti-Asian hate hoax is clearly designed to run cover for the blacks, who are attacking Asians on the street, and for the Biden government, which is continuing to escalate conflict with the Chinese as part of a globalist agenda.

Related: The Anti-Asian Attacks are the Pre-Show for Mass Anti-White Attacks

However, while the anti-Asian fake hate wave we’re currently seeing has an immediate purpose, it is also part of the peak political correctness we are experiencing.

The goal is to close off entire areas of the human thought process, to force people to regulate their own thoughts, under fear of being destroyed. They are continually upping the ante, classifying more and more bizarre things as “racist” for the purpose of confusing people.

This is a conditioning process.

The end goal is to get people to the point where they are simply going along with anything the authorities say, without processing it through logically at all. That is why it’s getting increasingly silly. They don’t want you to understand it. They want to teach you to obey things that you don’t understand.

This ultimately isn’t really even about race. Race is just something very fundamental in people’s brains. We know that infants recognize race. “People who look like me are safer than people who look different” is a basic, hardwired instinct. Especially with blacks, frankly, when you see them your spine starts to tingle a little bit, in the same way it does when you see a spider or a snake. This is a genetically-coded safety mechanism – your genes telling you to be on high alert and be careful. Telling people to praise the blacks, and replace their neighbors with blacks, is no different than telling people to replace their dogs with giant spiders.

Aside from that, there is also a normal human fascination with exoticism, which is different from any “racist” instinct (it is sort of the opposite, actually), and they are lumping that in with racism in a really confusing way; that is to say: things that are actually tributes to foreign people are labeled racist hatred (the Asian fonts and cartoons do not contain any negativity, but they are telling us that any acknowledgement of difference is fundamentally negative).

They are messing with basic internal drives, calling these drives evil, in order to get people to submit.

It’s the same thing they do with forcing people to accept homosexuality. A heterosexual male’s brain has the same reaction to two men kissing as it has to maggots. They actually published this in a peer-reviewed journal in 2017.

They force homosexuality on you, from everywhere.

They tell you you are evil (anti-social) if you don’t accept it.

You see what is happening here: they are forcing you to suppress biological responses and natural urges. Once you get used to doing that, you lose connection with your natural modes of thought and emotion. This makes you totally malleable, and willing to accept things that should be considered horrible.

Political correctness is psychological warfare. It is a way to create an autoimmune response in people’s psychology, where a person’s thoughts and emotions are attacking their own personhood.

The only reason you would do this to people is if you were trying to hurt them.

Tying It All Up

Apparently, some of the readership has struggled with understanding the link between the anti-Asian hate hoax campaign and starting a war with China.

I’m not really sure how to say it any clearer than I have said it: they want cover so as to not be called racists for fighting a war against Asia. They have really played up this racism thing over the past decade, and they don’t want to be accused of racism for starting a war against a foreign race.

Furthermore, it is an attempt to get other Asians to side with ZOG against the CCP.

But it’s also simpler than that: this is all just total confusionism (not to be confused with Confucianism). They are purposefully creating mass confusion.

These are both nonsensical statements:

This is all psychological warfare, designed to push people along an agenda.

No matter what, there remains a bottom line here: there are always more of us than there are of them, and yet they use us for their own purposes. The more confused we are, the easier their job is.

Nothing that happens can be understood outside of an understanding of a Jewish plan to create a one world government, where the entire population of the globe is enslaved to an elite ruling minority.