Attacking Traditional Science To Make It Appear White Man Not Just Bad, But Racist for Centuries!

stock  here.   I read enough.   They intentionally spin this and just make stuff up,
also pretending the supposition is indeed fact, using "sources". 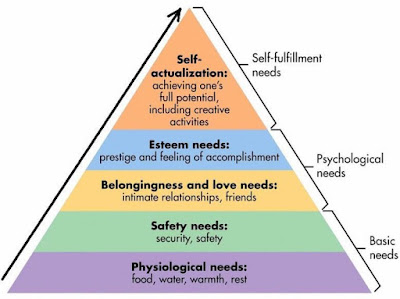 Use your critical thinking skills and analyze this.   Also the comments on Twitter are beyond amazing.   The Woke suck up anything
without thought.

Maslow’s hierarchy of needs was informed by the Blackfeet Nation— and he mixed it up, because he didn’t know how to make it fit within America’s individualized culture.https://t.co/oRaZEUKKzU

They pretend that Maslow developed his entire theory of "self actualization" from spending 6 weeks with Blackfoot Indians.   Then they pretend that he made the "pyramid" when that was in fact subsequently made by others.   Then they present an Indian Pyramid to "prove" how he just stole it and flipped it to satify white racism and white greediness.

Disgusting hit job.   And sorry, but the whole narrative of Indians living in harmony with the land, and being peaceful overall, is a fabricated tale.

Indians depleted the resources of an area and then moved to another site, which they then depleted.   Their absence let the area recover.   It is not a horrible tale, its actually pretty smart.  But it only was achievable because of limited population, Bill Gates would be proud.

Also the Woodland Indians (the mound builders of the Midwest) were completely wiped out, genocided 100% by a new group of Indians around 1000AD.   I think these were the Asian Indians that came over or up and wiped them out.   The new Indians are trying to "adopt" the Woodland for a more historic claim on the land.