In new video, Makhia Bryant can be heard screaming “I’m gonna stab the Eff out of you, Bitch,” 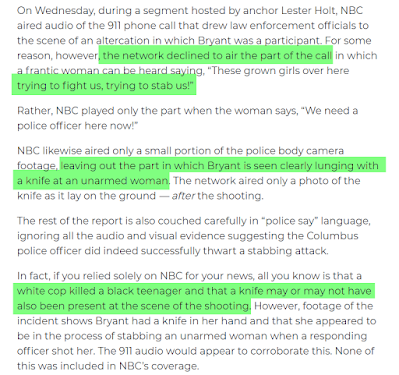 stock here: I haven't paid much attention to this one.    It's just one of what will be
dozens.  WARNING person being shot, so if that bothers you much, don't watch.

And of course MSM leaves out critical context, because we all know they want a race war, and they want cops NOT to do their jobs.

What do you expect you get when you shout out:

In new video, Makhia Bryant can be heard screaming “I’m gonna stab the fuck out of you, bitch,” while lunging at two unarmed people

In new video, Makhia Bryant can be heard screaming “I’m gonna stab the fuck out of you, bitch,” while lunging at two unarmed people who were posing no imminent physical threat to her

------------------------------------------------------
Amazingly quick reactions by that cop, and good aim. A lesser operator may have shot innocents.
Amazing comments too, apparently by people who watched the video, but somehow did not see how quickly the whole thing rolled out.   Go ahead and read comments, they lean way left #BLM
Not the bee also pulled together a bunch of the "helpful" comments.....
https://notthebee.com/article/in-the-wake-of-the-columbus-shooting-the-twitterverse-came-alive-with-non-lethal-alternatives-and-they-are-epic
It does not give the right for that cop to take the girls life away. Instead of the gun why didn’t used to taser. He could of handle that situation a lot different. If he couldn’t then he shouldn’t be a cop then. #BLM
Once again, pseudo-intellectual Ben Shapiro shows no shame in defending literal murder. Due process is decided by the courts, dumbshit, not by the handgun of a police officer.
Right here in this moment the cop looked at a 16 year old girl with a knife on the floor with another person and instead of choosing to stop them, he pulled out his service weapon and waited until he had a clean shot to execute her.
-------------------------------------------

Could Chris Rock do this skit now? pic.twitter.com/f84BvcmXaq