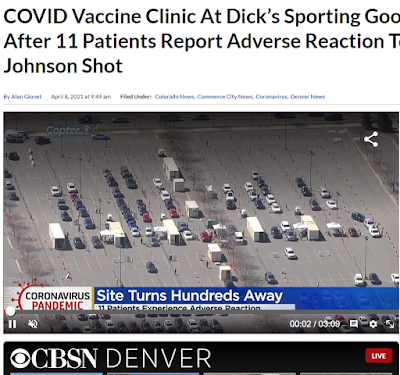 stock here: Originally they said it was 18 people affected, then reduced it to 11

People still trust Jesuit Fauci.....watch the interview with the Marine.

11 Jab-Idiots had immediate adverse reactions and 2 were taken to the hospital by ambulance.    But authorities later said "The reactions were what could be expected from a vaccine", LOL, ouch.   Sure, ya, right......stay in your lane.

And of course, this is in a Bad Actor State, with anti 2A Bad Actor Dicks Sporting Goods

In a statement, the state health department said, “The state has no reason to believe that people who were vaccinated today at Dick’s Sporting Goods Park should be concerned. Adverse reactions are typically immediate.”

A total of 640 patients were unable to receive their vaccine on Wednesday. Centura Health plans to reschedule those appointments for April 11 at Dick’s Sporting Goods Park.

Doucett admits he now has some trepidation about receiving the J&J vaccine, and he’s glad his vaccination was rescheduled. He says things just stopped when he was in line.

“(They) passed out some waters and they said ‘There’s a little problem, just stand by for a minute.’ And they came back like an hour or so later and that’s when they said that there were too many adverse reactions and that they didn’t feel comfortable with it and that they would reschedule it.”

“I’m glad I didn’t get the shot and suffer some adverse reactions or anything,” he said.

But ultimately, he’ll be glad to be vaccinated.

His wife had already received the J&J vaccine earlier in the day at the Ball Arena vaccination site in Denver and he says she’s doing great.

“This is not going to deter me at all,” he said.

According to the Centers for Disease Control and Prevention, the J&J/Janssen is a one-dose COVID vaccine that was 63% effective in clinical trials. Possible side effects in the arm where the shot is given include pain, redness and swelling. Other side effects in the body may include tiredness, headache, muscle pain, chills, fever and nausea. The CDC said that side effects usually start within a day or two of getting the vaccine and should go away in a few days.

The CDPHE says there have been 10 previous reactions at community vaccine sites before this incident, according to the Vaccine Adverse Event Reporting System. The CDC and FDA both manage the system.