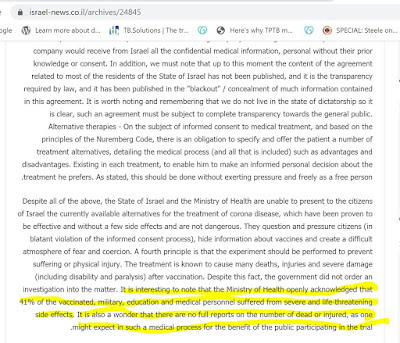 Hague Tribunal by Adv. Ruth Makhanskovsky and
Adv. Arie Suchowolski on the matter: Violation of the Nuremberg Code by the Government of Israel and other parties

The "People of Truth" organization filed a complaint with the Hague Tribunal against the Israeli government, which is conducting illegal experiments on Israeli citizens, through Pfizer. A complaint filed with the Hague Tribunal reads: "This is an association whose members are lawyers, doctors, public activists and the general public, who have chosen to exercise their democratic right not to receive the experimental medical treatment (Corona vaccine), and feel that they are under great, severe and illegal pressure from the government. Israel, Knesset members, ministers, senior public representatives, mayors and more.

We want to start with a basic knowledge on the subject: Corona virus is an innovative medical treatment, which only recently received FDA approval in the United States (in emergency procedures only), a non-final approval, with details on 22 vaccine side effects. In addition, it is clear to all medical factors that the issue of long-term impact of treatment has not been scientifically investigated (testing and research), and the long-term impact and safety of treatment on its recipients is unknown. It is important to note that so far the body has never been given and all previous vaccines have worked in a completely different way, by introducing a disabled or attenuated virus and a natural arousal of the immune system against it. As detailed by a senior virologist, the risks expected in this innovative medical treatment are hereby attached as Appendix 1 to my letter.

"Nuremberg Code" - a code of medical ethics issued on the basis of laws under which Nazi criminals were tried for conducting horrific medical experiments during World War II, in the doctors' trial known as the Nuremberg Trials. The Nuremberg Code later formed the basis for the enactment of the Helsinki Declaration as well as the basis for the Patient Rights Act in Israel. We intend to present to you and detail how in the State of Israel this year, the Israeli government with its ministers and members of the Knesset, mayors and other senior officials, are violating the Nuremberg Act illegally, blatantly. And extremists, and unfortunately, not just in one aspect but many, too many!

A. Conscious consent to participate in a medical experiment - The first principle of the Nuremberg Code is the willingness and informed consent of the person to receive treatment and participate in the experiment. The person should exercise the freedom of choice without the intervention of an entity that exercises force, deception, fraud, threat, solicitation, or any other type of binding or coercion. When the heads of the Ministry of Health and the Prime Minister introduced the vaccine in Israel and began vaccinating the residents of Israel, the vaccines were not recommended, because in practice they take part in a medical experiment and their consent is required by the Nuremberg Code, and only when it became clear , It was first published and also stated by the Prime Minister that this is indeed a medical experiment. , And that this was the essence of the agreement. This is, in fact, a genetic medical experiment in humans, performed without the informed consent and under a serious and blatant violation of the Nuremberg Code.

B. Bibi-Pfizer Agreement. After the incident, it became clear that the Israeli prime minister had signed an agreement with Pfizer (the manufacturing company), under which he would receive a huge amount of millions of vaccine doses, and in preference over other countries, and given that, the vaccines (Israeli residents) would serve as "experimenters" for the drug company. It was agreed that the pharmaceutical company would receive from Israel all the confidential medical information, personal without their prior knowledge or consent. In addition, we must note that up to this moment the content of the agreement related to most of the residents of the State of Israel has not been published, and it is the transparency required by law, and it has been published in the "blackout" / concealment of much information contained in this agreement. It is worth noting and remembering that we do not live in the state of the dictatorship so it is clear, such an agreement must be subject to complete transparency towards the general public. Alternative therapies - On the subject of informed consent to medical treatment, and based on the principles of the Nuremberg Code, there is an obligation to specify and offer the patient a number of treatment alternatives, detailing the medical process (and all that is included) such as advantages and disadvantages. Existing in each treatment, to enable him to make an informed personal decision about the treatment he prefers. As stated, this should be done without exerting pressure and freely as a free person.

Despite all of the above, the State of Israel and the Ministry of Health are unable to present to the citizens of Israel the currently available alternatives for the treatment of corona disease, which have been proven to be effective and without a few side effects and are not dangerous. They question and pressure citizens (in blatant violation of the informed consent process), hide information about vaccines and create a difficult atmosphere of fear and coercion. A fourth principle is that the experiment should be performed to prevent suffering or physical injury. The treatment is known to cause many deaths, injuries and severe damage (including disability and paralysis) after vaccination. Despite this fact, the government did not order an investigation into the matter. It is interesting to note that the Ministry of Health openly acknowledged that 41% of the vaccinated, military, education and medical personnel suffered from severe and life-threatening side effects. It is also a wonder that there are no full reports on the number of dead or injured, as one might expect in such a medical process for the benefit of the public participating in the trial.

A fifth principle states that the experiment must not be conducted when there is reason to believe that actual death or injury is occurring. For a violation of this principle see above. As mentioned, with regard to the data on deaths, we citizens hear by word of mouth only on social networks (by friends, neighbors or relatives) and not in the mainstream media. Another principle is that the person responsible for the experiment will be willing to stop it at any stage if there is a reasonable reason to believe that it will result in injury, disability or death of the experimenter. It has already been proven that many good people died from the treatment, were injured, became disabled and suffered paralysis. However, the Israeli government continues to force this dangerous experiment on the citizens of Israel. The following are recent publications, which illustrate the blatant and criminal violations of the Nuremberg Code on behalf of the government, ministers and members of the Knesset, mayors and senior public figures, as well as employers:

Therefore, and taking into account the above, we address in your honor two main requirements:

Advocate Ruth Makhanskovsky told Israel News that "at the same time, the complaint will also be filed in the court in Nuremberg, together with the German lawyer Reiner Polmich. On Monday, the High Court will be filed by and by Aryeh Suchowolski in Israel, regarding the violation of the Nuremberg Code. "

Link to complaint filed in The Hague:   https://drive.google.com/file/d/1JjRt_OjBrHPjuegftFhvRmtdKwv9PFqo/view