stock here: I had heard this allegation before, that mRNA could lead to CJD, aka 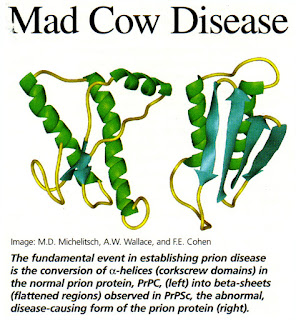 Creutzfeldt-Jakob Disease aka Mad Cow effects.
In Mad Cow they indicate cause is mal-formed Prions.   Paper cited describes these Mal-Formed Prions as "pathologic prion confirmations".   Science without Spirituality is a rocky road to hell (stock TM).
Mad Cow was enhanced in deer when hunters would feed their future prey to make them big.    They were often fed a type of Slump from cows on the most unmarketable parts and remnants.     I posited this is God's penalty for making animals be eaten by their same type.
My step-Mom died from Creutzfeldt-Jakob-Disease so this topic is very near and dear to my heart.   It was confirmed twice at the Mayo clinic, so yes it was the real thing and not "just" Alzheimer's.
But it was never supported until this was sent to me by a reader. Big Mahalo.
Note that in 2007 they first started talking about making a vaccine for Cows and Deer.   In 2014 the claimed the first sucessful Vaccine in Deer.   hmmm    7 years?   To make a vaccine with efficacy, and test them on animals.
Point is the "Operation Warp Speed" is ridiculous and that "they" are either playing with fire, or they are intentionally looking to destabilize the population.
https://nyulangone.org/news/first-successful-vaccination-against-mad-cow-wasting-disease-deer
------------------------------------------------------
https://principia-scientific.com/covid-19-rna-based-vaccines-and-the-risk-of-prion-disease/
Development of new vaccine technology has been plagued with problems in the past. The current RNA based SARSCoV-2 vaccines were approved in the US using an emergency order without extensive long term safety testing. In this paper the Pfizer COVID-19 vaccine was evaluated for the potential to induce prion-based disease in vaccine recipients. The RNA sequence of the vaccine as well as the spike protein target interaction were analyzed for the potential to convert intracellular RNA binding proteins TAR DNA binding protein (TDP-43) and Fused in Sarcoma (FUS) into their pathologic prion conformations. The results indicate that the vaccine RNA has specific sequences that may induce TDP-43 and FUS to fold into their pathologic prion confirmations. In the current analysis a total of sixteen UG tandem repeats (ΨGΨG) were identified and additional UG (ΨG) rich sequences were identified. Two GGΨA sequences were found. Potential G Quadruplex sequences are possibly present but a more sophisticated computer program is needed to verify these. Furthermore, the spike protein, created by the translation of the vaccine RNA, binds angiotensin converting enzyme 2 (ACE2), a zinc containing enzyme. This interaction has the potential to increase intracellular zinc. Zinc ions have been shown to cause the transformation of TDP-43 to its pathologic prion configuration. The folding of TDP-43 and FUS into their pathologic prion confirmations is known to cause ALS, front temporal lobar degeneration, Alzheimer’s disease and other neurological degenerative diseases. The enclosed finding as well as additional potential risks leads the author to believe that regulatory approval of the RNA based vaccines for SARS-CoV-2 was premature and that the vaccine may cause much more harm than benefit.
-----------------------------------------
And here is a Chinese Pastor pimping for the vaccine. He boils it down to "you don't think for yourself" because when you eat a Big Mac you are trusting the FDA, trucking companies, etc. Effing Hilarious!!!! If you are eating Big Macs, you are already a lost sheeple!
Posted by Stock at 3:58 PM