Biden Is Fed the UFO Question Ahead of Time, And Starts Laughing Immediately, Then 8 Seconds of Stupid Smirk To Allow the Question to be Voiced....Complicit Dangerous Media 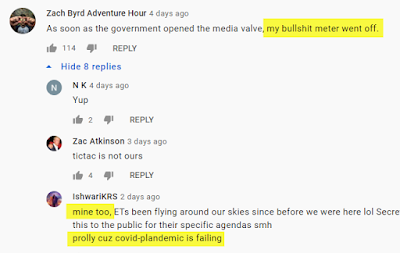 Dr. Steven Greer explains who the main disinformation agents are.   Video at bottom.

"Of Course" UFOs are now a "thing", they have endeavoured to change your life in as many ways as possible, for years now.    Including things like email spam -- that is somehow not stopped by SPAM filters even though it is beyond obvious, and fake phone calls marketing crap no one would have an interest in.

The authoritarianism of the "Banking System", including the robots that monitor your temperature as you enter, telling you to "come closer", and the onslaught of $50 Bills.    Yes, its a real thing.   Instead of $100's being everywhere, now they want to hand you $50's which everyone pretty much despises, since you might by accident hand it out as a $20.

A "thousand points of black light", a thousand ways in which great evil works together to upset your balance.    Weeks back there was a meme of "Don't try to be balanced or to move from your center", that is all an illusion stemming from a racist belief that balance is possible and a natural goal.

And here is Fake Joe, being fielded the questions ahead of time.   he starts laughing as soon as he recognizes the "Obama" question start to come at him.    And then for 8 seconds he stands there smirking, knowing he is so clever, holding back his smarty pants answer.    He dodges the UFO question, and the media erupts in applause!!!

It's all a movie, and it's being rammed down our throats.   Gag reflex anyone?