China Writes to UN About Foreign Genes Injected as Gene Therapy Vectors, And Bioweapons Against Genes Unique to Certain Races

Hmmmm......as Gates said, "they will take notice of the second one" 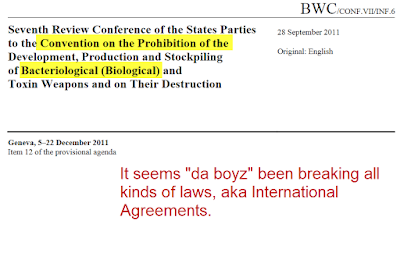 A third way is by making the target population more susceptible to pathogenic microbes. RNA interference can inactivate specific genes in the body, inhibit expression of important bodily proteins, disrupt physiological function and heighten the effects of a bioweapon attack.

And a fourth way is by making biological attacks more stealthy. Foreign genes or viruses can be introduced into the target population asymptomatically by means of gene-therapy vectors, enabling a biological weapon attack to be mounted covertly.”

This is the final UN report, that has incorporated China's submission, which is posted above in parts.   Its from 2011.