No Leaders Attended the G7 -- 2 Actors and a Little Girl

Bojo is an actor, that they rewarded with a little girl.

Justin Trudeau meanwhile seemed genuinely hurt when nobody liked his little Bhangra dance routine back in Delhi in 2018. It’s not entirely his fault: He was in Indian costume, and he slipped into the role. He forgot for a moment that his full time job was pretending to be a prime minister.

You could replace Biden with any Hollywood actor—George Clooney, Tom Hanks, Denzel Washington, Meryl Streep—and it wouldn’t make the slightest difference in how the country is being run or what policies are pursued. You could replace Biden with a paper cup. That might destroy the illusion (though not by much). Biden is a figurehead, rather more embarrassing than the Queen of England, and rather less powerful.

G7 Has 9 People, I mean actors 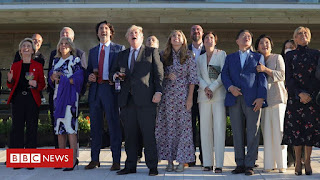