Massive Update: How To EFFECTIVELY Claim A Vaccine Exemption, What To Say, What NOT to Say

My thoughts is that the Exemptions are stronger from top to bottom.   I would play the Religious Belief first, and if they threw that out, and your State allowed a Personal Belief Exemption, then play the PBE card.

DO NOT Play the Medical Exemption card FIRST.   I'll cover  that in detail at the bottom, but suffice it to say if you play the Medical card, in the end with the CDC it only comes down to

1) Being allergic to the COVID Vaccine (sick circular logic there)

2) Being allergic to PEG, but then you are still eligible for the J&J Jab

I would also have a little printout of CFR 18-242 which says Rights in the Title but it also covers any privileges you have, one of them being the "privilege" of not being injected with an experimental medical treatment approved only for emergency use, doubled privileged when there is no EMERGENCY.

Remind the "Trusted Messengers" <aka Goon Squad> that under 18-242 if they jabbed you and bodily injury occurs they could go to jail for up to 10 years, and if death occurs, they can be put to death themselves.

SECOND PUBLISHING THOUGHT -- One may wish to shy away from being a "conspiracist" by announcing that they are not "anti-vax" and by stating how you recently got a Tetanus Vaccine or whatever.    This would give "them" an out, and with summary judgement they would VOID your religious exemption because obviously it is not a deeply held belief.

5 States are Bad Actors, with Connecticut joining that list in 2021.   They were also the first state I found to publish the ingredients of the novel VXX.

ALSO BY CLOSE INSPECTION as of this writing it can categorically be stated that if a State does not allow a Religious Exemption, they ALL also do not allow a Philosophical exemption

NOTE: These states are employers, so the case can be made that Title VII applies.

Which law provides religious exemption from vaccines? -- stock here, this statement is from the source, and I disagree.   There are many laws at State level that further define vaccination policy.

Title VII of the Civil Rights Act of 1964 3 says employers cannot refuse to “accommodate an employee’s sincerely 4 held religious beliefs or practices unless the accommodation would 5 impose an undue hardship.”

It's funny, the link above does not link to title VII, but to a "Guidance on title VII", from the Equal Employment Opportunity, which is also OK with affirmative action and giving farm grants to only
"non whites".

And it would be silly to hang your hat on Title VII as protection from forced vaccination, since Title VII only applies to employers.   So if an airline prevents you from flying without Vax, or if your local village or town sends Goons door to door to intimidate you into Vax, Title VII simply does not apply at all.

* The existing statute in Minnesota and Louisiana does not explicitly 6 recognize religion as a reason for claiming an exemption, however, as a 7 practical matter, the non-medical exemption may encompass religious 8 beliefs. 9 ​ 10

**In Virginia, parents can receive a personal exemption only for the HPV vaccine. 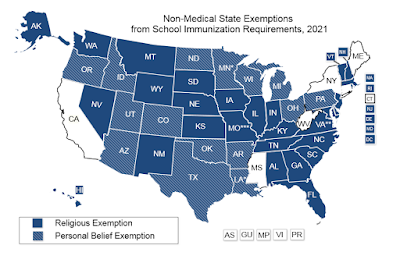 I wanted to give broad guidance on how to claim an exemption, but I think you really need to read your own State law FIRST.

In Wisconsin, there is an important distinction between normal times, and "State of Emergency".    Here is one example for you to read through.  There is a whole larger section above it.

(1)  14 Except as provided in sub. (2), during the period under which the department is designated as the lead state agency, as specified in s. 250.042 (2), the department, as the public health authority, may do all of the following as necessary to address a public health emergency: 15
16 (a) Order any individual to receive a vaccination unless Post settings Labels No matching suggestions Published on 7/18/21 7:01 PM Permalink Location Search Description Options
Posted by Stock at 12:14 PM