What IF?? What If The VXX Was Setting Up to Kill Off The Ones Most Easily Swayed By Propaganda, The Shallowest Thinkers, The Most Easily Bought 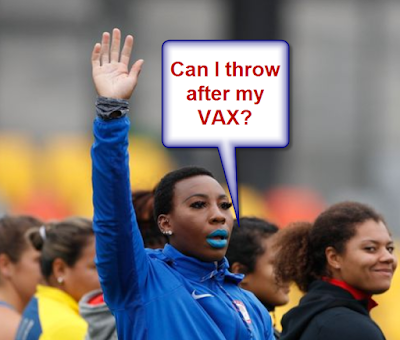 I don't think the Conservatives would have the balls to pull this off, but it's weird with Trump pushing the VXX, and now lots of Republican Governors pushing the VXX....but if they did, there would be a great reset, and the USA could truly become the greatest country in the world.

You wouldn't be creating a Master Race per se, just eliminating the weakest.   The remaining population could still complete against each other in a free enterprise system.

And I haven't weighed in on this YET, but of course all male set records in female sports would be annulled.  Women athletes must be beyond pissed right now.  It's very intentional, the plot to marginalize strong women.

And of course the overall "Outrage Factory" approach.

Back to mass murder, so many people are jumping on the "Nuremberg Code" as a way to bring these criminals to justice.  In the jading and jokeful legal system, they simply throw out your case because these experiments are not being carried out by a Government.    And if "they" were setting up to kill hundreds of millions, would they really care about "a law"?   LOL