An interesting site, not yet studied, first presenting they they Uranus and Neptune are the solar cyclc controlling forces.

stock here, in about 2016 and maybe a bit before, it was noticed that ALL of planets had changing weather.   Not just earth.

The external effect may be the galactic current sheet, which has a wavy pattern, and as these waves pass by and modulate, even change polarity, we can observe changes in the solar system.

Link below is to a real bearish website, sheesh, more bearish than my view even.
http://solarstormwarning.com/

This link below is from Truth Out, Describes the Carrington Scenario
http://truth-out.org/news/item/7301-400-chernobyls-solar-flares-electromagnetic-pulses-and-nuclear-armageddon&gt

The current lie is a form of misdirection....a shell game of sorts. By pretending that by increasing the current hours of backup power available at Nuke Plants from 4 hours to 8 hours, that in that case "Nuclear is Safe". The answer is Heck No! There are still many compelling reasons to eliminate nuclear power from our planet even if they made their backup power better than 4 hours. And one of these MOST COMPELLING is the Carrington Event.


On January 22, 2012 we had a "Wake Up Call"
It didn't turn out to be too serious.   Picture the sun being 93,000,000 miles away and firing a shotgun blast the size of the earth, towards the earth.    Well it is not likely to be a direct hit.   Apart from some Satelite disruption, and a few pieces of "space junk" falling out of the sky (indeed the atmosphere changes and causes drag on space junk which then falls out of the sky), some really neat northern lights, and some detectable electric currents in Norway, well it wasn't too bad. 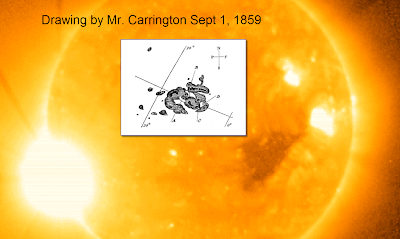 But it could be bad.  In 1989 a mini-Carrington burnt up some industrial size transformers, and shut down the grid for 6 million people.    Serious enough stuff.
read Here
http://www.solarstorms.org/SS1989.html

Just think what would happen if it wasn't just one power company and a few big transformers, what if it was 400 power companies, 5000 transformers, and 400 nuke plants melting down?    We have been set up for this, we are living on borrowed time.
http://www.huffingtonpost.com/matthew-stein/400-chernobyls_b_1171129.html

Mr. Carrington was a researcher who observed the sun with a telescope. He noticed a pattern of sunspots /storms never seen before. This created Aurora Borealis throughout the globe, even seen in Cuba. It fried some of the few pipeline and telegraphs in use at the time, the time was 1869. Supposedly, there was a similar event around 1600.

Read this article from NASA stating how another Carrington Event could wipe out our current electronic and electrical grid. I mean wipe it out for years. Not the end of the human species, but are you ready for that?

These effects are not so uncommon....seems like we get a big enough event every decade or so---from NASA

of the effects of solar geomagnetic storms on terrestrial communications when a huge solar flare on August 4, 1972, knocked out long-distance telephone communication across Illinois. That event, in fact, caused AT&T to redesign its power system for transatlantic cables. A similar flare on March 13, 1989, provoked geomagnetic storms that disrupted electric power transmission from the Hydro Québec generating station in Canada, blacking out most of the province and plunging 6 million people into darkness for 9 hours;

Lets says that big portions of the grid were knocked out. Emergency response was difficult. And the 400 nuclear plants on the earth exceeded their 4 to 8 hours of backup capacity, and started melting down, and continued. Indeed, that is what we have set ourselves up for. Sad indeed, and we know that only emergencies get government and regulatory bodies off their duff, and even back in the day "they" used to be slow to react, now they seem to lash out with coverups, denials, and the exact opposite response of what is needed.

The answer is simple, this insane method of boiling water needs to come to an end. Not tomorrow, and it might take 20 years, in which we are just HOPING that a Carrington or Mini-Carrington doesn't occur. 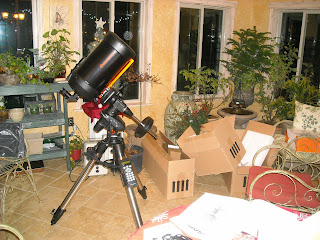 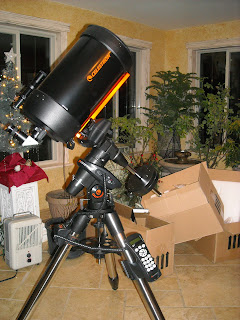 I still think this is the best Christmas Gift I have ever received (even if I had to buy it, even if I immediately lent it out).

A fantastically good telescope, able to hook up to a camera, and also able to hookup to a computer and be controlled by the computer ...."go to Orion Nebula" and it takes you right there.    It has its own GPS so it has a pretty good idea where it is in the world, then you just point it at any three bright sky objects, and it then knows automatically where everything is Exactly.    Pick any 3 bright objects and you don't even have to tell it what those objects are.

Now that is cool!

The Scope is only about 60 lbs wet (lets hope it doesn't get wet), but is a beast at gathering light.   These are actual pictures.


A troll from another site had this to say

Nature can destroy anything. Yet we factor natural phenomena into every engineered structure. We look at likelihood

­s and even if the 63 million year asteroid (likelihoo­d 1/63e6 years) were to hit, that doesnt hinder life on this planet from moving forward

And BTW have you ever looked at the moon, look at the number of big strikes on the moon, in fact it is all crater, crater within craters.    So if the Earth is 4B years, and lets say Moon popped up same time, then at a rate of 63 million years for a big strike on a big object like the earth, that would mean a maximum of 65 hits on the moon, and yet there are thousands!

You wouldn't know the moon if it was uranus


Allen said at February 17, 2011 8:14 AM: Some thoughts -
First: although they're similar, a Carrington event and EMP (as from a high-altitude nuclear blast) are NOT the same, and require different fixes to harden equipment and systems.

Second: there is a lot of overlap in which equipment and systems that need to be hardened (the electrical system, especially the equipment that is connected to long-distance transmission lines, although it's also true that the surges induced in community distribution lines can wreck a lot of residential equipment that isn't really designed to block them).
Third: we have an opportunity in front of us - the "Smart Grid" project. A lot of the effort in that project is currently going to figuring out how to use load-point control (think controls on your electric water heater, air conditioning, etc. to automatically make everyone a little less comfortable when necessary to avoid brownouts) to serve more people with the system capacity we've got. Any competent system design for Smart Grid has to consider automatically shedding and balancing load when parts of the grid become disconnected from each other due to failures and overloads. It would be easy to extend those requirements just a little further, to provide for automatic disconnection and grounding of transmission lines on command when needed. High levels of security and robustness would be needed - command equipment for deliberately shutting down the nation's grid might be added to the President's nuclear "football". Residence-level Smart Grid comm equipment could similarly disconnect your home from community distribution lines, and (because the Smart Grid assumes there's communication between power plants, grid controls, and your home) could give you a "Civil Defense" - like warning that the shutdown was about to happen, and why.
Disclaimer: although I'm an electrical engineer with some interest in this, I'm not a distribution grid designer. If you can improve these thoughts, please offer your ideas. THEN - educate where necessary, plant ideas where appropriate, to take advantage of the window of opportunity to get grid-hardening against Carrington and EMP events into Smart Grid planning.