Exposing Some of the "Big Lies"

In some areas, Radon is not completely avoidable. Mostly it seeps into basements. Radon ventilation systems are very effective, they can reduce this amount at least 50% and maybe 80%, just depends how much air you want to move. So instead of a 37% of your exposure if you reduce that 80% it is 7.5%, plus 5% cosmic, and 3% soil, that is 15%. So by "so called 'natural sources" like med procedures, nuke medicine, those items are jacking up your dose like 400% to 700% from where is could be "naturally". the whole natural radiation lie, unravels as a complete joke... about half of us will contract cancer in our lives, and yet you can't prove that any one source caused it. Therefore by the "Scientific Method" radiation cannot be proven to be unsafe, therefore the PNPs Pro Nuke Pimps will state that "natural radiation" is proven to be safe, and therefore a little extra disaster radiation is OK too. Check the chart closely, the PNP lies immediately emerge. 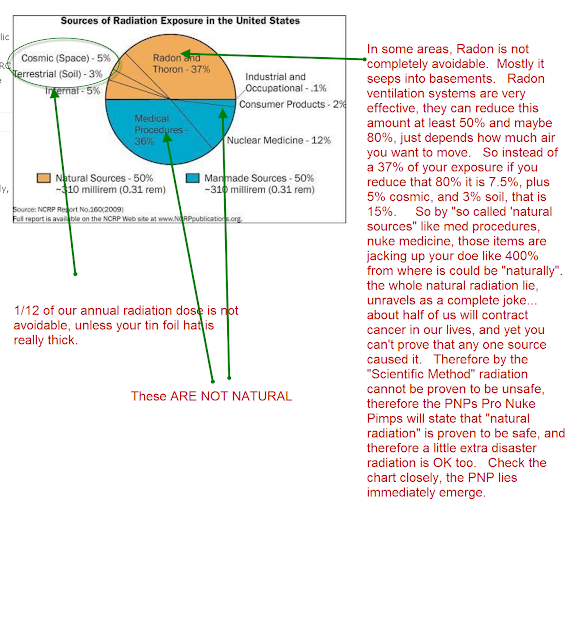 Caught this from a TEPCO released sampling video.    Raw Uranium Pellets just lying in the rubble, very clear cut.   Maybe MOX too.   Maybe some experimental fuels too.    Very odd stuff these rods in the rubble.


You just have to wonder if they weren't doing some type of research at Fukushima, and of course this type of thing wouldn't be publicized. 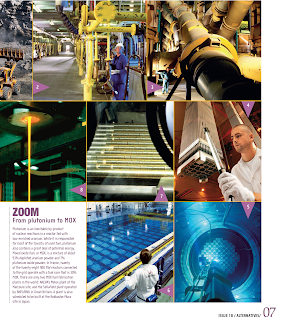 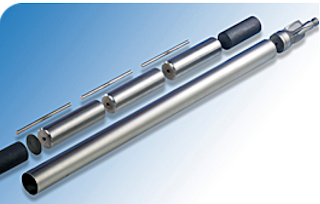 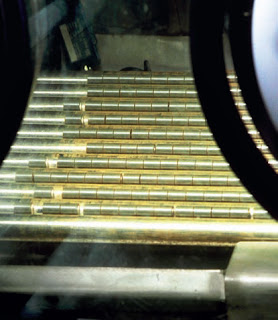 Here is a link just found December 2011, which shows fuel pellets made in France that look exactly like those shown in the video.   Also keep in mind that the "official news" reported fuel pellets found over 2 miles from the plants.

Here is the video, around 4:20 in are these closeups 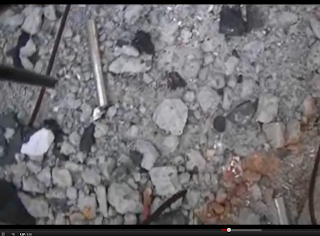 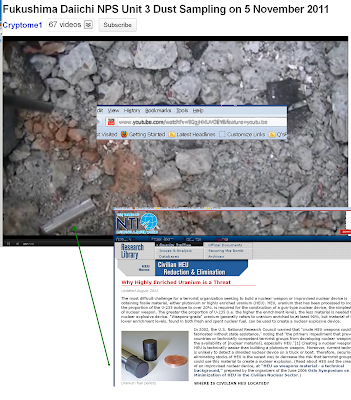 The Heiness Lie of "RISK FACTOR"

By a series deceptive tricks, the PNPs have come up with a simple "Risk Factor" which then multiplies by Sv in order to create "Excess Death Due To Cancer".   The lies are myriad, and digging deep is difficult, but lets just say this is a fair assessment of how they understimate risk in order to promote their evil craft---its Bullshit.

Read this, its awesome, it makes me look tame.
http://www.box.com/s/srptsqb42tpt7zo3ldev


THE NEW LIES
The new ones will be:
1. to downplay the prospects for renewable energy and energy efficiency – lies about costs, about “base load” power.
2. to tout the safety of new nuclear technology, such as “small modular thorium nuclear reactors”.
3. More subtly than lies – the nuclear lobby uses OMISSIONS –   watch how in 2012 the topics of Fukushima, and nuclear waste, fade from mention in the media, even though they are still topics of critical importance.


THE LIE: You need to work at a nuclear power plant or else you don't know diddly


by VMF211 "Fighting against Liberalism everyday"
09:42 PM on 12/29/2011
Funny how almost every Liberal or anti nuke here has never been in or worked in a
Nuclear Power Plant and has never worked with radiation exposure and yet they try to tell us what's going on there and how it They work and what's wrong with them.
It just cracks me up.


You appear to be making the argument that unless you work in a nuclear plant, and unless you "work" with radiation as a full time employment scenario, that you can know nothing of value.

I would say that basic facts can be known by interested laypeople, and that perhaps the basic facts are the most important. For instance, one could know facts about the sealing ability of a large butterfly valve to stop the very slippery hydrogen from slipping by and/or bypassing a backdraft damper, and one could know the cost estimates for implementa­tion of completely separate vent stacks that would "improve" safety, and one could postulate about the dangerous effects of Boral plates in spent fuel pools degrading and possibly allowing a moderating effect that could result in a prompt chain reaction. One could look at a hundred little way in which  incrementa­l increases in safety could be achieved, OR

One could look at the basic macro facts this this insanely dangerous technology to boil water blows up on a regular basis. See link

and one could look at the fact that every accident is attempted to be covered up to the maximum extent, until forced to partially fess up.

and one could look at the fact that the so called regulatory agencies are in fact, by their basic principles­, charged with promoting the expansion of nuclear in one of the most blatant and obvious conflicts of interest.

Scroll Down to Civilian and Military Accidents

THE LIE: "Nuclear is Safe as Long as You Can Feed Power Into Them"/ Carrington Event

The current lie is a form of misdirection....a shell game of sorts.    By pretending that by increasing the current hours of backup power available at Nuke Plants from 4 hours to 8 hours, that in that case "Nuclear is Safe".   The answer is Heck No!   There are still many compelling reasons to eliminate nuclear power from our planet even if they made their backup power better than 4 hours.  And one of these MOST COMPELLING is the Carrington Event.

Mr. Carrington was a researcher who observed the sun with a telescope.   He noticed a pattern of sunspots /storms never seen before.   This created Aurora Borealis throughout the globe, even seen in Cuba.   It fried some of the few pipeline and telegraphs in use at the time, the time was 1869.  Supposedly, there was a similar event around 1600

Read this article from NASA stating how another Carrington Event could wipe out our current electronic and electrical grid.   I mean wipe it out for years.   Not the end of the human species, but are you ready for that?

These effects are not so uncommon....seems like we get a big enough event every decade or so---from NASA


of the effects of solar geomagnetic storms on terrestrial communications when a huge solar flare on August 4, 1972, knocked out long-distance telephone communication across Illinois. That event, in fact, caused AT&T to redesign its power system for transatlantic cables. A similar flare on March 13, 1989, provoked geomagnetic storms that disrupted electric power transmission from the Hydro Québec generating station in Canada, blacking out most of the province and plunging 6 million people into darkness for 9 hours;

Lets says that big portions of the grid were knocked out.   Emergency response was difficult. And the 400 nuclear plants on the earth exceeded their 4 to 8 hours of backup capacity, and started melting down, and continued.    Indeed, that is what we have set ourselves up for.   Sad indeed, and we know that only emergencies get government and regulatory bodies off their duff, and even back in the day "they" used to be slow to react, now they seem to lash out with coverups, denials, and the exact opposite response of what is needed.

The answer is simple, this insane method of boiling water needs to come to an end.   Not tomorrow, and it might take 20 years, in which we are just HOPING that a Carrington or Mini-Carrington doesn't occur.

In some areas, Radon is not completely avoidable. Mostly it seeps into basements. Radon ventilation systems are very effective, they can reduce this amount at least 50% and maybe 80%, just depends how much air you want to move. So instead of a 37% of your exposure if you reduce that 80% it is 7.5%, plus 5% cosmic, and 3% soil, that is 15%. So by "so called 'natural sources" like med procedures, nuke medicine, those items are jacking up your dose like 400% to 700% from where is could be "naturally". the whole natural radiation lie, unravels as a complete joke... about half of us will contract cancer in our lives, and yet you can't prove that any one source caused it. Therefore by the "Scientific Method" radiation cannot be proven to be unsafe, therefore the PNPs Pro Nuke Pimps will state that "natural radiation" is proven to be safe, and therefore a little extra disaster radiation is OK too. Check the chart closely, the PNP lies immediately emerge. 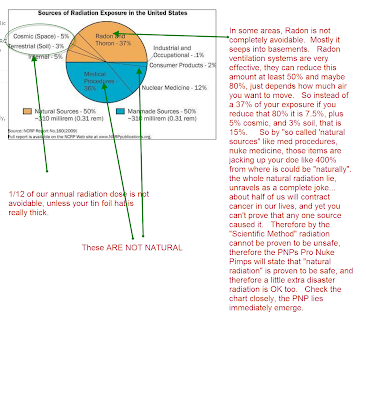 1) It's not renewable. Mineable uranium won't last much longer than the planet's oil stocks. The available energy content for recoverabl­e oil and uranium is about the same. Moreover, uranium mining is terrible for the environmen­t, causing, among other things, horrific problems for local water tables.

2) It's not cost-effec­tive. It has never been able to compete with other forms of energy without the massive subsidies. It is by far the most expensive way to boil water.

3) It's not a green energy source. It produces some of the most toxic pollution there is (with no real solution on how to deal permanentl­y with it). The ONLY good thing is that it doesn't release as much carbon (however, it still does for the mining, enrichment and transporta­tion processes)­.

4) It has massive "asymmetry­­" in the risks versus benefits. A meltdown will swamp any economic benefit derived from the electricit­y that plant produced. And remember, it's not a question of if there will be more disasters - only when. To believe that an accident "can't happen" is the ultimate in statistica­l­ arrogance.

Of all of the forms of energy, the cheapest incrementa­l energy "source" by far is the so-called "negawatt"­­, or the watt of energy that can be saved and not wasted. Not only are most conservati­on solutions cheaper to implement than new nuclear power reactors, they leave us with the energy that we would have otherwise wasted, to be used at some point in the future.

And since the EU gets about 60% more GDP out of its total energy use than America, it's pretty clear that 1) there's room for improvemen­t in the US and 2) there's already a great example AND supporting technology to allow the US to pursue this. China has figured this out (as has most of the rest of the world), making the US less efficient than the rest of the world with each passing year. And MASSIVE subsidies doled out to oil, gas, coal and nuclear power suppliers is a BIG part of the reason behind this waste. America goes out of its way to make energy artificial­ly cheap when you buy it, since in America, nearly all of the "external costs" associated with energy usage side effects (pollution­­, risk of a meltdown, massive military costs in the Gulf, etc.) are paid for by the taxpayer and NOT the suppliers (or even the direct purchasers­­) of this energy.

And always remember, utilities, oil majors, coal producers and nuclear power plant operators (just like ANY other business), will never be happy with any attempt at reducing demand for their product, since it will impact both the amount sold AND the price.

So they will ALWAYS resist conservati­on efforts. Always.


This from the BBC is an utter joke, and disinformation.  It says stop running from Nuclear Accidents.
http://www.bbc.co.uk/news/world-12860842